Create chart for an existing person or animal 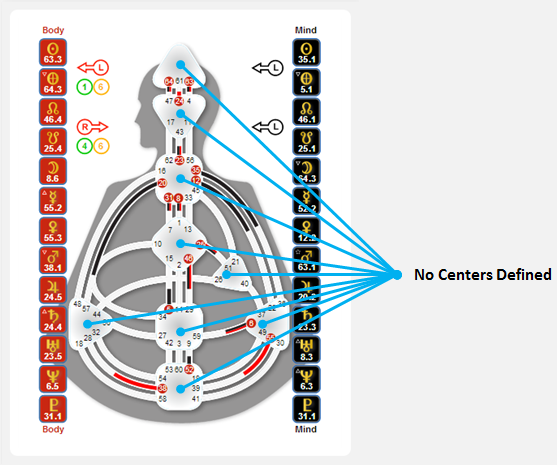 The Reflector in more detail

The Reflector carries an extraordinary Human Design. They make-up just 1% of the worlds’ population and are wholly different from the way the other 99% of human beings operate.

Reflectors have no energy or awareness Centers turned on and activated at birth. Every Center in their design is completely white. As a result, they give off an illusion about themselves that has nothing to do with who they really are.

On the face of it, with all those inactive centers, it would seem that a Reflector is constantly taking in other peoples’ energies and emotions. Without any reliable patterns of their own.

If we were talking about any other type of human being this would indeed be the case. An open inactivated center is always vulnerable to the affects of other people.

But the fundamental difference with a Reflector is the nature of their electromagnetic aura. Our human aura represents the holistic energy field that uniquely surrounds each and every one of us. This aura is our personal electromagnetic signature and tells every living thing around us what we are all about. This aura extends up to 3 meters around the entire circumference of our body. Having an aura also gives us the ability to read and interpret other people’s auras.

The Reflector aura is a ‘resistant’ aura that does two things uniquely. Firstly it samples or ‘tastes’ the auras of the people around it by taking in only a little piece of what it receives. Secondly it reflects back all of what it receives from the other person.

This resistant aura works as a protection mechanism for the Reflector. Protection from being overwhelmed by the emotions and energies of the other people around them.

It is also what makes the Reflector seem like a chameleon to the rest of us. A chameleon that just blends in with whatever is around it. Reflectors become their environment. They do this quite naturally but often feel invisible to others because of it.

Other people will always see aspects of themselves when they meet a Reflector; so Reflectors need to be aware of whom they are in a relationship with.

A Reflector should watch themselves interact with other people to see what negative and positive aspects those people will bring to a relationship.

So Reflectors should spend some time becoming aware of what is actually them and what they are reflecting. It will take some practice and it is only over time that they will get to know their real selves.

Reflectors are walking around in a protective auric ‘bubble’ which doesn’t connect deeply at all to other people. And this makes personal relationships more difficult for Reflectors than for the rest of us. The closest any other aura comes to the Reflector is the Manifestor aura.

A major factor that really makes Reflectors different is the profound effect the movement of the planets has on their daily lives. This is what their resistant aura cannot protect them against.

The planets transiting through their regular orbits activate and de-activate gates in all of our designs continually. But only Reflectors feel these effects deeply.

Non-Reflectors only receive a small taste of the effects of these transiting planets. They just get to experience a little of the energies and emotions made possible by teh transit of the planets.

But Reflectors get the Full Monty! They feel all the energetic effects of the planets profoundly.

Some say that this is the most important thing that Reflectors are really here for. They are here to show all of us the full human effects of the movement of the planets on a continual basis.

Reflectors operate in a totally opposite way to the other 99% of the world.

Reflectors have no decision making area within themselves that they can rely on.

Generators can rely on their sacral center for decision making. People with Splenic Center decision making authority can rely on the spontaneity of their decisions. Those with an activated Solar Plexus Center need to wait for absolute clarity through their emotional wave before making any decision but they can still rely on it to be there for them. Even people with heart or self centers holding sway for their decisions have a reliable if more delicate mechanism. But Reflectors? They have no Center activations at all. How are Reflectors supposed to make reliable decisions for their lives?

Reflectors, uniquely, have a very close relationship with the moon. They live in a time zone all their own. It is a lunar cycle time zone. It is this closeness to the moon that offers the Reflector an ability to make decisions reliably. But in order to be correct the Reflector needs to wait out the entire 28 day lunar cycle before making a decision. And of course this is a very difficult thing to do!

But it is important for Reflectors to not allow themselves to be rushed into making decisions. When someone finds out that they are a Reflector for the first time they should begin the process of explaining to other people that it is not healthy for them to be rushed in their process.

It is also helpful for Reflectors to monitor the daily transit of the planets and the impact this will have on them for that day. The daily transit chart shows the gate activations in all human beings for that day as a result of the current position of the planets. These activations (depending on the gates involved) can activate centers, form channels or add additional active gates to an existing center.

So, when the daily chart is that of a Manifestor, that is who the Reflector will be. Or a Generator or a Projector.

Reflectors can really use this to their advantage. By looking ahead in time at the transit charts for future days the Reflector will know exactly how energetic or not they will be feeling. So they can select their Manifestor, Generator and Manifesting Generator days when they need to really productive! And maybe not commit so much on the Projector days.

The important thing for the Reflector to remember is that this transit is not who they really are, they are just reflecting. The most reliable aspect of a Reflectors personality will be their profile and motivational Color. These aspects of the Reflector are not affected by transiting planets or people moving in and out of the Reflector aura.

Reflectors will also find it helpful to talk to others and listen objectively to the feedback during their 28 day process of making any decision. They should also try to have the same conversation with different people to see the different responses and possibilities to any situation.

Four of the most important decisions a Reflector will need to make correctly in life are:

– Who they live with

– Who they work with

If the community they live within is supportive and nourishing they will blossom and flourish. If it isn’t, life can become very disappointing for the Reflector.

If Reflectors really master their human designs they have the chance to become the wisest and most objective people amongst us.

Is my information secure?

Yes, 100% secure. Only you get access to your account. Your information is stored and continuously backed up using the latest encrypted web technologies on our dedicated Internet server cloud.

What is the minimum period of your membership?

There is no minimum period of membership.

What are the Payment cycle intervals for membership subscription fees?

How do I cancel my subscription?

You can cancel your subscription at any time by clicking Cancel Subscription within settings in your GM Hub before the date that your current subscription period ends.

What will be the status of my GM Account after cancelling my subscription?

What will happen to my information and charts if I cancel my subscription?

Your information and charts are stored securely on the Genetic Matrix server cloud but will not be accessible until you renew your paid membership subscription.