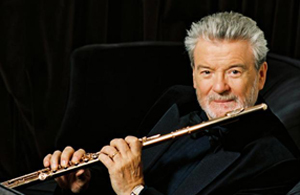 Sir James Galway OBE (born December 8, 1939) is a Northern Ireland–born virtuoso flautist from Belfast, nicknamed "The Man With the Golden Flute". Following in the footsteps of Jean-Pierre Rampal, he became one of the first flute players to establish an international career as a soloist.

Career
After his education time he spent 15 years as an orchestral player. Galway played with the Philharmonia Orchestra as it rose to prominence in the 1950s.

He then played with Sadler's Wells Opera, Covent Garden Opera, the London Symphony Orchestra and the Royal Philharmonic Orchestra. He auditioned for the Berlin Philharmonic Orchestra under Herbert von Karajan, and was principal flute of that orchestra from 1969 to 1975. To Karajan's surprise and dismay, after a period of some disagreement, "Jimmy" Galway decided that he would leave to pursue a solo career, which he succeeded in doing admirably.

In addition to his performances of the standard classical repertoire, he features contemporary music in his programs, including new flute works commissioned by and for him by composers including David Amram, Malcolm Arnold, William Bolcom, John Corigliano, Dave Heath, and Lowell Liebermann. The album "In Ireland" by "James Galway and the Chieftains" reached number 32 in the UK album charts in 1987.

He still performs regularly and is one of the world's most well-known flute players.

He is Principal Guest Conductor of the London Mozart Players, based at the Fairfield Halls, Croydon, South London.

Most recently, Sir James has performed for the Academy Award-winning ensemble recording the soundtracks of Peter Jackson's Lord of the Rings film trilogy, composed by Howard Shore.

In June 2008, Sir James was inducted into the Hollywood Bowl Hall of Fame along with Liza Minnelli and B. B. King.

He currently performs on Nagahara flutes, as well as some Muramatsu Flutes.

Personal
In the 1970s James Galway moved from Berlin to Lucerne, Switzerland, the home town of his second wife, Anna (Annie) Renggli, one of the daughters of a well-known local architect. They had twins and a son. In 1978 he recorded for her the famous instrumental version of John Denver's "Annie's Song". After their divorce he moved to Meggen, Switzerland, a posh village next to Lucerne, where he resides now with his third wife, U.S.-born Jeanne (nee Cinnante). They often tour together playing duets, accompanied by Phillip Moll on piano. In addition, they give masterclasses for flutists of all levels.

Sir James is also president of a global organization called Flutewise, a charitable organisation which donates flutes to low-income students and people with disabilities, run by Liz Goodwin.

In 2003 he formed the Music Education Consortium together with Julian Lloyd Webber, Evelyn Glennie and the late Michael Kamen to pressure the British Government into providing better music education in schools.

James's nephew Martin Galway is a musician famous for his work on Commodore 64 computer game music in the 1980s.

Trivia
Apparently he was late for his audition for the Berlin Philharmonic, he was denied the right to audition but he somehow convinced the reception to let him audition. Being late, the enraged Karajan made him play all sorts of excerpts and solos that were beyond the originally proposed audition material, hoping to humble and embarrass Galway. To Karajan's surprise, not only did Galway manage to play everything with spot on accuracy and fluid musicality, he was able to do a lot of it by memory when the music was not at hand, demonstrating his extensive knowledge and grasp of the flute repertoire. He was unanimously chosen by the judges and granted the principal flute position slot, but Galway stated he didn't really like how they denied his right to audition and just left for London. It was the Royal Philharmonic that convinced Galway to return as the principal flute.