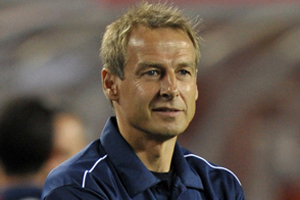 He who played for several prominent clubs in Europe and was part of the West German national team that won the 1990 FIFA World Cup. He was one of Germany's premier strikers during the 90s.

He managed the German national team to a third-place finish in the 2006 World Cup, a much better result than the general expectations, including those from Germany's own fans.

On 12 July 2006, Klinsmann officially announced that he would step down as Germany's coach after two years in charge and be replaced by assistant coach Joachim Löw.

Klinsmann was born in Göppingen, Baden-Württemberg. He was first introduced to football at the age of eight, playing every position in his youth, including goalkeeper. He started his professional career at the age of seventeen at Stuttgarter Kickers, which at the time was a second division club. In 1984 he joined the more prestigious Stuttgart club VfB Stuttgart, a perennial first division member.

Besides playing for German clubs VfB Stuttgart and Bayern Munich, Klinsmann played abroad for Internazionale, AS Monaco, Tottenham Hotspur and Sampdoria. During this time he was under the tutelage of such coaches as Arsène Wenger and Giovanni Trapattoni, among others.

The first time he arrived at Tottenham he was not popular in England, partly because he played in the 1990 Germany team that knocked England out of the World Cup, and partly because of his reputation as a diver. After his Tottenham debut, when he poked fun at himself by diving across the pitch to celebrate his first goal, he became much more popular. One Guardian journalist, who had written an article called "Why I Hate Jürgen Klinsmann", wrote another two months later called "Why I Love Jürgen Klinsmann". Klinsmann went on to win the 1995 Football Writers' Association Footballer of the Year

During his second stint at Tottenham, Klinsmann decided to retire from playing professional football in the summer of 1998 after the World Cup. Under the pseudonym Jay Goppingen, Klinsmann made a comeback as a player in 2003 for Orange County Blue Star in the American Premier Development League. The 39-year-old was able to score five goals in eight appearances, helping his team to reach the playoffs. The name is taken from the town of Göppingen, where Klinsmann was born.

National team playing career
Please help improve this section by expanding it.
Further information might be found on the talk page or at requests for expansion.
This article has been tagged since January 2007.
Olympic medal record
Competitor for West Germany
Men's Football
Bronze 1988 Seoul Team Competition
Klinsmann had a fruitful international career, seeing his first Germany duty in 1987 and in the end collecting 108 caps along with 47 international goals. He participated in the 1988 Summer Olympics, winning a bronze medal; the 1988, 1992 and 1996 European Championships, reaching the final in 1992 and becoming champion in 1996. He was also an important part of the German team in the World Cups of 1990 (in which he scored 3 goals), 1994 (5 goals), and 1998 (3 goals), winning the World Cup in 1990. He was the first player ever to score at least 3 goals in each of 3 World Cups, later joined by Ronaldo of Brazil. He still remains second all time in World Cup goals scored by a German with 11.

Upon retiring from active play, Klinsmann started his commercial career. He became the vice-president of a sports marketing consultancy based in the United States and was involved in Major League Soccer as part of the Los Angeles Galaxy team.

On 26 July 2004, he returned to Germany as the new coach of the national team, succeeding former teammate and strike partner Rudi Völler. Klinsmann subsequently embarked on an aggressive program to revamp the management of the team. Bringing fellow German striker Oliver Bierhoff on board helped diffuse public relations duties of the previous combined post away from the actual coaching aspect of the position. Furthermore, he created a youth movement to breathe life into an aging squad on the heels of a disastrous showing at Euro 2004. In the run up to the 2006 World Cup, Klinsmann attracted criticism from German fans and the media following poor results, such as the 4-1 loss to Italy. A particular subject of criticism was that Klinsmann commuted to Germany from the United States, which was the target of a campaign by the "Bild" tabloid. It should be noted that Klinsmann had previously eliminated some privileges Bild traditionally had with the national team, such as receiving the team lineup the day before a match, and 24/7 exclusive access to the team. His largely offensive tactics have irritated some, who complain that he ignores defensive football. He announced a squad of young players for the 2006 World Cup, basing his selection policy on performance, not reputation.

During the 2005 Confederations Cup, he regularly rotated his goalkeepers regardless of their performances, which drew the ire of Bayern Munich's Oliver Kahn. On April 7, 2006, Klinsmann finally decided to relegate Kahn to the bench and designated Arsenal's Jens Lehmann as his first choice goalkeeper. This choice followed Lehmann's performances in the 2006 Champions League in which his Arsenal team bowed out in the final against Barcelona.

In the 2006 World Cup, the performances of Klinsmann's team silenced his critics. The team recorded three straight wins against Costa Rica, Poland and Ecuador in the first round, earning Germany the first place in Group A. The first game of the knock out stage was a 2-0 victory over Sweden, and in the quarter-finals, Klinsmann's team defeated Argentina, winning 4-2 on penalties. The teams drew 1-1 for 120 minutes after an equalising goal from Miroslav Klose in the 80th minute.

In the semi-final on July 4th, Germany lost a close match with Italy 2-0 after goals in the final minutes of extra time from Fabio Grosso and Alessandro Del Piero. After the match, Klinsmann praised the performance of his young team. They beat Portugal 3-1 in the third place play-off, where he played Kahn instead of Jens Lehmann. The victory triggered a massive Berlin parade the following day where Klinsmann and the team were honoured by the public.

Afterward, Franz Beckenbauer, previously a strident critic of Klinsmann's, declared his desire to see Klinsmann continue as coach. There was also widespread public support for Klinsmann due to his team's spirit and attacking style of play. The team's strong performance is thought by some to have renewed national pride and restored Germany's reputation as a top footballing nation. Due to his success coaching the national team, Klinsmann was awarded the Bundesverdienstkreuz. He was even referred to as "Kaiser", a term meaning "emperor" in German, usually reserved for German footballing greats, e.g. Franz Beckenbauer.

Despite the satisfactory performance at the World Cup and the praise earned, Klinsmann declined to renew his contract, informing the DFB of his decision on July 11, 2006. The decision was officially announced by the DFB on the 12th of July 2006. Klinsmann's assistant Joachim Löw was appointed as the new head trainer at the same press conference. Said Klinsmann, who is based in California, "My big wish is to go back to my family, to go back to leading a normal life with them." He continued "After two years of putting in a lot of energy, I feel I lack the power and the strength to continue in the same way."

Named to the FIFA 100, Pelé's list of the 125 greatest living players announced as a part of FIFA's centenary celebration in March 2004.

Klinsmann's family operates a bakery in Stuttgart's Botnang district and consequently he is sometimes affectionately referred to as the "baker's son from Botnang". Klinsmann is in fact a qualified baker's apprentice. He is married to Chinese-American Debbie Chin, a former model. Klinsmann currently lives in Huntington Beach, California (closer reports say Newport Beach, California) with his wife and two children, Jonathan (b. 1997) and Leila (b. 2001).