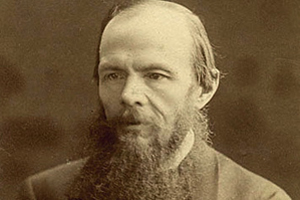 Dostoevsky's works have had a profound and lasting effect on twentieth-century thought and world literature.

Dostoevsky's primary works, mainly novels, explore human psychology in the troubled political, social and spiritual context of his 19th-century Russian society. Considered by many as a founder or precursor of 20th-century existentialism, his Notes from Underground (1864), written in the embittered voice of the anonymous "underground man", was named by Walter Kaufmann as the "best overture for existentialism ever written."

Early life
Dostoevsky was the second of seven children born to Mikhail and Maria Dostoevsky. Dostoevsky's father was a retired military surgeon and a violent alcoholic, who served as a doctor at the Mariinsky Hospital for the Poor in Moscow. The hospital was situated in one of the worst areas in Moscow. Local landmarks included a cemetery for criminals, a lunatic asylum, and an orphanage for abandoned infants. This urban landscape made a lasting impression on the young Dostoevsky, whose interests in and compassion for the poor, oppressed and tormented was apparent in him. Though his parents forbade it, Dostoevsky liked to wander out to the hospital garden, where the suffering patients sat to catch a glimpse of sun. The young Dostoevsky loved to spend time with these patients and hear their stories.

There are many stories of Dostoevsky's father's despotic treatment of his children. After returning home from work, he would take a nap while his children, ordered to keep absolutely silent, stood by their slumbering father in shifts and swatted at any flies that came near his head. However, it is the opinion of Joseph Frank, a biographer of Dostoevsky, that the father figure in The Brothers Karamazov is not based on Dostoevsky's own father. Letters and personal accounts demonstrate that they had a fairly loving relationship.

Shortly after his mother died of tuberculosis in 1837, Dostoevsky and his brother were sent to the Military Engineering Academy at St Petersburg. Fyodor's father died in 1839. Though it has never been proven, it is believed by some that he was murdered by his own serfs. Reportedly, they became enraged during one of his drunken fits of violence, restrained him, and poured vodka into his mouth until he drowned. Another story holds that Mikhail died of natural causes, and a neighboring landowner invented the story of his murder so that he might buy the estate inexpensively. The figure of his domineering father would exert a large effect upon Dostoevsky's work, and is notably seen through the character of Fyodor Pavlovich Karamazov, the "wicked and sentimental buffoon" father of the four main characters in his 1880 novel The Brothers Karamazov.

Dostoevsky was an epileptic and his first seizure occurred when he was 9 years old. Epileptic seizures recurred sporadically throughout his life, and Dostoevsky's experiences are thought to have formed the basis for his description of Prince Myshkin's epilepsy in his novel The Idiot, among others.

At the St Petersburg Academy of Military Engineering, Dostoevsky was taught mathematics, a subject he despised. However, he also studied literature by Shakespeare, Pascal, Victor Hugo and E.T.A. Hoffmann. Though he focused on areas different from mathematics, he did well on the exams and received a commission in 1841. That year, he is known to have written two romantic plays, influenced by the German Romantic poet/playwright Friedrich Schiller: Mary Stuart and Boris Godunov. The plays have not been preserved. Though Dostoevsky, a self-described "dreamer" as a young man, at the time revered Schiller, in the years which yielded his great masterpieces he usually poked fun at him.

Beginnings of a literary career
Dostoevsky was made a lieutenant in 1842, and left the Engineering Academy the following year. He completed a translation into Russian of Balzac's novel Eugénie Grandet in 1843, but it brought him little or no attention. Dostoevsky started to write his own fiction in late 1844 after leaving the army. In 1845, his first work, the epistolary short novel, Poor Folk, published in the periodical The Contemporary (Sovremennik), was met with great acclaim. The editor of the magazine, the poet Nikolai Nekrasov, walked into the office of the liberal critic Vissarion Belinsky, and announced: "A new Gogol has arisen!" Belinsky, his followers and many others agreed and after the novel was fully published in book form at the beginning of the next year, Dostoevsky became a literary celebrity at the age of 24.

In 1846, Belinsky and many others reacted negatively to his novella, The Double, a psychological study of a bureaucrat whose alter ego overtakes his life. Dostoevsky's fame began to cool. Much of his work after Poor Folk met with mixed reviews and it seemed that Belinsky's prediction that Dostoevsky would be one of the greatest writers of Russia was mistaken.

Exile in Siberia
Dostoevsky was arrested and imprisoned on April 23, 1849 for being a part of the liberal, intellectual group, the Petrashevsky Circle. Tsar Nicholas I after seeing the Revolutions of 1848 in Europe was harsh on any sort of underground organization which he felt could put autocracy into jeopardy. On November 16 that year Dostoevsky, along with the other members of the Petrashevsky Circle, was sentenced to death. After a mock execution, in which he and other members of the group stood outside in freezing weather waiting to be shot by a firing squad, Dostoevsky's sentence was commuted to four years of exile with hard labor at a katorga prison camp in Omsk, Siberia. Dostoevsky described later to his brother the sufferings he went through as the years in which he was "shut up in a coffin." Describing the dilapidated barracks which, as he put in his own words, "should have been torn down years ago", he wrote:

"In summer, intolerable closeness; in winter, unendurable cold. All the floors were rotten. Filth on the floors an inch thick; one could slip and fall...We were packed like herrings in a barrel...There was no room to turn around. From dusk to dawn it was impossible not to behave like pigs...Fleas, lice, and black beetles by the bushel..."

He was released from prison in 1854, and was required to serve in the Siberian Regiment. Dostoevsky spent the following five years as a private (and later lieutenant) in the Regiment's Seventh Line Battalion, stationed at the fortress of Semipalatinsk, now in Kazakhstan. While there, he began a relationship with Maria Dmitrievna Isaeva, the wife of an acquaintance in Siberia. They married in February 1857, after her husband's death.

It is popularly believed that Dostoevsky's experiences in prison and the army resulted in major changes in his political and religious convictions, and that after his ordeal he became disillusioned with 'Western' ideas and began to pay greater tribute to traditional Russian values. Perhaps most significantly, he had what his biographer Joseph Frank describes as a conversion experience in prison, which greatly strengthened his Christian, and specifically Orthodox, faith (the experience is depicted by Dostoevsky in The Peasant Marey (1876)). While conversion plays a strong role in many of his works, not all his characters arrive at Christianity in a moment of crisis (notably, Alyosha in The Brothers Karamazov is converted through the example of the good works and moral teachings of Elder Zosima.) Although we cannot assume with authority that Dostoevsky's prison ordeal was the sole catalyst for his dramatic shift in views and style, this explanation parallels his own semi-autobiographical description of prison life in The House of the Dead.

Whether inspired solely by his prison experiences or for reasons known only to himself, Dostoevsky was a sharp critic of the Nihilist and Socialist movements of his day, and in part dedicated his book The Possessed and his The Diary of a Writer to espousing conservatism and criticizing socialist ideas. He later formed a friendship with the conservative statesman Konstantin Pobedonostsev embracing some of the tenets of Pochvennichestvo.

While Dostoevsky's post-prison novels abandoned the European-style domestic melodrama and quaint character study which characterized his youthful work, this might also have been the result of his maturation and growing confidence in himself as a writer. Dostoevsky's mature fiction explored themes of existentialism, spiritual torment, religious awakening and the psychological confusion caused by the conflict between traditional Russian culture and the influx of modern, Western philosophy.

Later literary career
In December 1859, Dostoevsky returned to St. Petersburg, where he ran a series of unsuccessful literary journals, Vremya (Time) and Epokha (Epoch), with his older brother Mikhail. The latter had to be shut down as a consequence of its coverage of the Polish Uprising of 1863. That year Dostoevsky traveled to Europe and frequented the gambling casinos. There he met Apollinaria Suslova, the model for Dostoevsky's "proud women", such as Katerina Ivanovna in both Crime and Punishment and The Brothers Karamazov.

Dostoevsky was devastated by his wife's death in 1864, which was followed shortly thereafter by his brother's death. He was financially crippled by business debts and the need to provide for his wife's son from her earlier marriage and his brother's widow and children. Dostoevsky sank into a deep depression, frequenting gambling parlors and accumulating massive losses at the tables.

Dostoevsky suffered from an acute gambling compulsion as well as from its consequences. By one account Crime and Punishment, possibly his best known novel, was completed in a mad hurry because Dostoevsky was in urgent need of an advance from his publisher. He had been left practically penniless after a gambling spree. Dostoevsky wrote The Gambler simultaneously in order to satisfy an agreement with his publisher Stellovsky who, if he did not receive a new work, would have claimed the copyrights to all of Dostoevsky's writings.

Motivated by the dual wish to escape his creditors at home and to visit the casinos abroad, Dostoevsky traveled to Western Europe. There, he attempted to rekindle a love affair with Suslova, but she refused his marriage proposal. Dostoevsky was heartbroken, but soon met Anna Grigorevna Snitkina, a twenty-year-old stenographer. Shortly before marrying her in 1867, he dictated The Gambler to her. This period resulted in the writing of what are generally considered to be his greatest books. From 1873 to 1881 he published the Writer's Diary, a monthly journal full of short stories, sketches, and articles on current events. The journal was an enormous success.

Dostoevsky is also known to have influenced and been influenced by the philosopher Vladimir Sergeyevich Solovyov. Solovyov is noted as the inspiration for the character Alyosha Karamazov.

In 1877, Dostoevsky gave the keynote eulogy at the funeral of his friend, the poet Nekrasov, to much controversy. In 1880, shortly before he died, he gave his famous Pushkin speech at the unveiling of the Pushkin monument in Moscow. From that event on, Dostoevsky was acclaimed all over Russia as one of her greatest writers and hailed as a prophet, almost a mystic.

In his later years, Fyodor Dostoevsky lived for a long time at the resort of Staraya Russa, which was closer to St. Petersburg and less expensive than German resorts. He died on February 9 (January 28 O.S.), 1881 of a lung hemorrhage associated with emphysema and an epileptic seizure. He was interred in Tikhvin Cemetery at the Alexander Nevsky Monastery, St Petersburg, Russia. Forty thousand mourners attended his funeral.1 His tombstone reads "Verily, Verily, I say unto you, Except a corn of wheat fall into the ground and die, it abideth alone: but if it die, it bringeth forth much fruit." from John 12:24, which is also the epigraph of his final novel, The Brothers Karamazov.