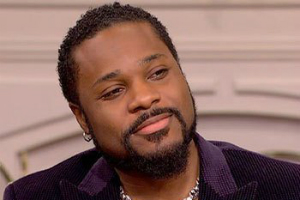 Malcolm-Jamal Warner (born August 18, 1970) is an American television actor, television director, and musician. He is best known for his roles as Theo Huxtable on the long-running NBC sitcom The Cosby Show. and as Malcolm McGee on the UPN sitcom Malcolm & Eddie. He is currently starring as Dr. Alex Reed on the new BET sitcom Reed Between the Lines.

Malcolm-Jamal Warner was born in Jersey City, New Jersey and was raised by his divorced mother, Pamela Warner, who served as his manager. He was named after Malcolm X and Jazz pianist Ahmad Jamal. At the age of 9, Malcolm demonstrated an interest in show business which led to enrollment in acting schools. His active career as a child later led him to graduate high school from The Professional Children's School in New York City.

With appearances and roles on many television shows and films, he landed his most successful role as Theo Huxtable, the only son of Heathcliff Huxtable, who was played by Bill Cosby on the NBC sitcom, The Cosby Show from 1984 to 1992. Warner auditioned for the role on the very last day of the nationwide search and was chosen by Cosby himself.

He also starred in Jeremiah, was the voice of The Producer character on The Magic School Bus and co-starred with comedian Eddie Griffin for four years on the UPN sitcom Malcolm & Eddie. Warner continued his career on the CBS sitcom Listen Up! with Jason Alexander and the host of the literacy-promoting children's show CBS Storybreak. He guest-starred on an episode of The Fresh Prince of Bel Air playing the role of Hilary's boyfriend, and has directed several music videos including British R&B group Five Star's "I Love You For Sentimental Reasons" (1994) as well as many sitcom episodes including The Cosby Show, All that, Kenan & Kel, and Malcolm & Eddie. Also In 1988 Warner was In New Edition's 1988 Music Video N.E Heartbreak.

In addition, Warner directed the acclaimed, teen-oriented public health video "Time Out: The Truth About HIV, AIDS, and You" (1992), which featured Arsenio Hall and Earvin "Magic" Johnson (among others) discussing the realities of HIV and AIDS and the best ways to prevent its spread.

In 2003, Warner released his debut EP, "The Miles Long Mixtape." In 2007, Warner followed up with his second CD entitled, "Love & Other Social Issues." In 2009 he guest starred in an episode in the new TNT series HawthoRNe. In 2011 he guest starred in an episode of the NBC series Community as the ex-husband of Shirley Bennett (Yvette Nicole Brown). His character subtly referenced his Cosby Show past by wearing a "Cosby sweater" that he stated was from his dad.

He is also a performance poet, and has performed at the National Black Theatre Festival since 2003, in addition to hosting its Poetry Jam.

Warner's most recent television role is on Black Entertainment Television's new scripted comedic television series Reed Between the Lines as Alex Reed. In this series, which first aired in 2011 Warner plays the role of an English professor married to Carla Reed, a psychologist played by former Girlfriends star Tracee Ellis Ross. The couple have three children together, Kaci, played by Zoe Borde and Kenan Renolds played by Nadji Jeter, which are Carla's children from a previous relationship and Alexis Reed Zoe Hendrix which is their child together. The show highlights the couple's ups and downs together as a blended family. In 2012 Warner was nominated for Outstanding Actor in a comedy series at the NAACP Image awards for his role in Reed Between the Lines.

Warner is also a bass player.