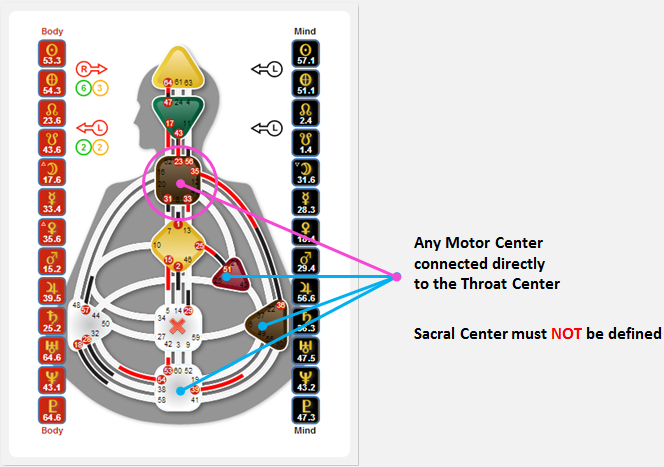 Manifestors are 9% of the world’s population Manifestors often feel different from other people and often wonder why.

They have access to incredible power which can be turned on suddenly and without warning. This can sometimes frighten other people and at times, even the manifestor themselves!

Manifestors have to be in control of their lives and really hate anyone to tell them what to do or how to do it. They need as much freedom as possible to live their life and to carve out their own destiny according to their own rules.

They are not here to wait, they are here to initiate and have impact on others and the world around them. If they don’t get the freedom of action that they need then watch out! As a child many manifestors were restricted by parents, teachers and other significant adults in their lives who thought that they were either troublesome or difficult in some way. The response of these adults was to try and control the manifestor child either physically (by restricting their freedom of movement) or with very strict rules.

Some manifestors go completely the other way and become people pleasers to avoid the difficult confrontations that they may have had as a child. Neither way of living is healthy for a manifestor. Some manifestors, particularly men, can also become violent and very angry because of being controlled and restricted as a child. They can react very strongly to anyone in their adult life who is trying to or is even perceived to be trying to control or manipulate them in some way. Manifestors are very sensitive and ‘tuned in’ when they are allowed to be themselves.

They have a natural curiosity and are the only type that can truly initiate action freely. Much of our world society rewards “doers” but in truth only manifestors can initiate action and ‘do something’ without having to wait in some way. And it is healthy for them to be this way! It is very unhealthy for the other 91% of the world to initiate in this way. But even manifestors need to be involved with other people! In order to survive in a world of people who have no idea who they are and actually immediately distrust manifestors (because of their repelling aura) it is best to have a strategy to over come this.

Human Design stipulates that the ideal strategy for manifestors is to ‘inform others before you act’. Which is sensible advice? In practice this strategy to a manifestor is like putting a red rag in front of a bull! I know several manifestors who still hate to do this because they think that they are in some way having to ask for permission to do what they want to do. Permission is something a manifestor detests having to ask for! It brings up all their childhood horror stories of control! I always suggest to manifestors that they start informing with the phrase “I’m just letting you know”. Don’t use something like “Do you mind” or “Is it ok with you”.

The strategy of a child Manifestor is that they should learn to ask permission, which can then naturally become informing as they get older. Each ‘type’ of human being has a strategy and this one for manifestors is in a way the most artificial – unlike the strategies of the other ‘types’ which are critical elements for living correctly as themselves.

Manifestors will still be able to initiate healthily whether they inform or not but what this strategy will do is reduce the confrontations that manifestors can encounter. To avoid confrontation all a manifestor has to remember is to let people know; keep people informed of your intentions and actions. This process of informing others will usually stop people from getting in the way or trying to control the manifestor because they don’t know what is coming next. Informing will also greatly reduce the manifestors own tendency toward anger because people will not be giving them as many reasons to get angry anymore.

Although this is a very useful strategy some manifestors can take it a little too far. They inform anyone and everyone. But In reality it is only desirable to inform those people that will actually be affected by your imminent action. It is not desirable at all to tell everyone all the time what you are up to!

The future for Manifestors

Since the beginning of human-kind manifestors were the rulers, the law-makers and the decision makers. Power was the order of the day and manifestors always win when it comes down to displays of pure raw ‘always on’ power. They can explode with a terrific burst of energy from a state of standstill in a microsecond! But in today’s world the emphasis is on entrepreneurs, democracy, sharing, cooperation, decentralized power. Absolute rulers are not welcome at all! The purpose of being a manifestor seems to have been taken away and the new world order has been taken over by the other types.

Projectors are our natural guides and democratic leaders. Generators and manifesting generators are the builders who are starting to learn that they are just as powerful as manifestors if they follow their strategies effectively. Even Reflectors have value roles to play in today’s society. But manifestors? Where do they fit in now? I think this change in the role of the pure manifestor is a real opportunity for them to evolve. Manifestors who are born today have the opportunity to relax, be free and have fun in their lives! Instead of being the autocratic rulers they can be measured by the initiating impact they have on the world.

They can initiate great projects and endeavors but will rarely stick with them right to the end. The baton usually must be passed to the generator group who have the staying power. But without the initial force and power that manifestors bring many projects would never get started in the first place Manifestors are still the only type of human being designed to freely initiate and with no precedent. Out of the blue, quite unexpectedly they see something and it happens. What a valuable quality to have.

They can be relied upon to break out from the crowd, to break the mould, to try something new and different. If manifestors are given this level of freedom they will really be able to bring their unique qualities into this world. Manifestors have no set pattern of work. They are not designed to work 9 to 5 day after day until they die.

The world needs people that can do thatâ€¦but they are not manifestors. Manifestors can make money easily and naturally in all sorts of different and unique ways. And because of their desire not to be controlled by others they usually work for themselves eventually. Manifestors are fast! Most manifestors find the pace of life very slow; it is as if life is in slow motion around them.

Everything, including their breathing, is faster in a manifestor body! So fear not all you millions of manifestors out there. With the advent of global communications and infrastructure coupled to your ability to manifest freely at great speed, and alone, a world of opportunity awaits both now and in the future! Manifestors still have a very important place in this world and (as I am sadly reading on many Internet sites) are certainly not ready to be put out to pasture and quietly retire from the world now that th eir place as rulers has gone! Don’t believe that for a minute!

The manifestor is perfectly designed to operate beautifully in the complex and technologically connected world that we live in!