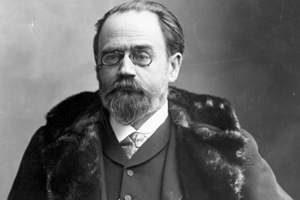 Emile Zola (2 April 1840 – 29 September 1902) was an influential French novelist, the most important example of the literary school of naturalism, and a major figure in the political liberalization of France.

More than half of Zola's novels were part of a set of 20 collectively known as Les Rougon-Macquart. Set in France's Second Empire, the series traces the 'hereditary' influence of violence, alcoholism, and prostitution in two branches of a single family: the respectable (that is, legitimate) Rougons and the disreputable (illegitimate) Macquarts, for five generations.

As he described his plans for the series, "I want to portray, at the outset of a century of liberty and truth, a family that cannot restrain itself in its rush to possess all the good things that progress is making available and is derailed by its own momentum, the fatal convulsions that accompany the birth of a new world."
Zola and the painter Paul CÃ©zanne were friends from childhood and in youth, but broke in later life over Zola's fictionalized depiction of CÃ©zanne and the Bohemian life of painters in his novel L'Å’uvre (The Masterpiece, 1886).

He risked his career and even his life on 13 January 1898, when his "J'accuse" , was published on the front page of the Paris daily, L'Aurore. The newspaper was run by Ernest Vaughan and Georges Clemenceau, who decided that the controversial story would be in the form of an open letter to the President, FÃ©lix Faure. "J'accuse" accused the government of antisemitism and of wrongfully placing the Jewish army captain Alfred Dreyfus in jail. The case, known as the Dreyfus affair, had divided France deeply between the reactionary army and church, and the more liberal commercial society. The ramifications continued for many years; on the 100th anniversary of Zola's article, France's Roman Catholic daily paper, La Croix, apologized for its antisemitic editorials during the Dreyfus Affair. Zola was a leading French thinker and his letter formed a major turning-point in the affair.

Zola was brought to trial for criminal libel on 9 June 1899, and was convicted on 23 February, sentenced, and removed from the Legion of Honor. He declared that Dreyfus' conviction and removal to a prisoners island came after a false accusation of espionage and was a miscarriage of justice. Rather than go to jail, he fled to England. But soon he was allowed to return in time to see the government fall.

The government offered Dreyfus a pardon (rather than exoneration), which he could accept and go free and so effectively admit that he was guilty, or face a re-trial in which he was sure to be convicted again. Although he was clearly not guilty, he chose to accept the pardon. Zola said, "The truth is on the march, and nothing shall stop it." In 1906, Dreyfus was completely exonerated by the Supreme Court.

Zola died in Paris on 29 September 1902 of carbon monoxide poisoning caused by a stopped chimney. He was 62 years old. His enemies were blamed, but nothing was proven. (Decades later, a Parisian roofer claimed on his deathbed to have closed the chimney for political reasons.) Zola was initially buried in the CimetiÃ¨re de Montmartre in Paris, but on 4 June 1908, almost six years after his death, his remains were moved to the PanthÃ©on.

The biographical film The Life of Emile Zola won the Academy Award for Best Picture in 1937. The film focuses mainly on Zola's involvement in the Dreyfus Affair.

In January 1998, President Jacques Chirac held a memorial to honor the centenary of J'Accuse.