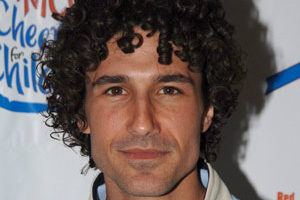 Ethan Zohn (born November 12, 1973), is an American professional soccer player, and a reality television series contestant who won $1,000,000 on Survivor: Africa, the third season of the reality TV series Survivor. He also appeared on the All-Stars edition of the show. After winning Survivor he co-founded Grassroot Soccer, which uses soccer to raise money and awareness to fight HIV/AIDS. On August 20, 2008, he began a 500-mile football dribble from Foxboro, Massachusetts to Washington, D.C. for that cause.

On January 22, 2010 he was ranked 14th in the USL Second Division Top 15 of the Decade, which announced a list of the best and most influential players of the previous decade.

In 2011, Zohn and his longtime girlfriend and fellow Survivor winner Jenna Morasca participated in the 19th season of The Amazing Race. They were eliminated 11th on the second (double elimination) episode.

Zohn was a soccer goalkeeper at Vassar College, and played professionally for the Hawaii Tsunami and Cape Cod Crusaders of the United Soccer Leagues and in Zimbabwe for Highlanders F.C.. He donated some of his winnings from Survivor to starting Grassroot Soccer, an organization whose goal is to "mobilize the global soccer community to combat the AIDS epidemic in Africa". Shortly after winning Survivor Africa, Ethan was hired by ESPN to serve as a sideline reporter for the US National Team's matches in the 2002 FIFA World Cup.

For his combined humanitarian efforts to spread HIV education throughout Africa via soccer teams for youth and young adults, Zohn received the Courage of Conscience Award from The Peace Abbey in Sherborn, Massachusetts.

As part of the Boran tribe, Zohn did not become an immediate target in the game; he was seen as a strong player who could potentially help to win many tribal immunities. When his tribe lost two back-to-back immunity challenges, he joined the majority to vote off Diane Ogden and Jessie Camacho in Episodes 1 and 2. Over the next few days, Ethan would form a long-term alliance with Lex van den Berghe and Tom Buchanan from his Boran tribe.

But a twist in episode 5 of the game saw both of Zohn's alliance members switch from Boran to the Samburu tribe, leaving Ethan alone with old Boran members Kim Johnson and Clarence Black. Two of the new Boran members from the Samburu tribe, Teresa Cooper and Frank Garrison, had an old misunderstanding with younger old-Samburu member Silas Gaither. So, in episode 5, a consensus was reached in which Ethan's tribe threw the immunity challenge in order to vote out the unpopular Silas. Both of Ethan's alliance members Tom and van den Berghe remained safe on the Samburu tribe, carrying all three into the merge.

Zohn's alliance soon began to control the game, with other members Kim Johnson and Kelly Goldsmith, all from the original Boran. They immediately targeted old-Boran member Clarence Black due to his physical strength and he was voted out. But, unbeknownst to Lex, he had received another vote at tribal council, a vote he believed had come from Kelly, but which actually came from Teresa. This led Lex on a witch-hunt against Kelly which almost led to the demise of Ethan's alliance when Kelly possessed the power with the other four ex-Samburu members, Teresa, Frank, Kim Powers and Brandon Quinton. But at the last minute, Brandon switched his vote, saving van den Berghe, and voting out Kelly. But this move came back to haunt Brandon, when Ethan's alliance saw him as untrustworthy and voted him out at the next tribal council.

Zohn, van den Berghe, Tom and Kim Johnson regained control of the game, outing previous Samburu members Frank, Kim Powers and Teresa in the next three tribal councils, carrying them into the Final 4. At the Final 4 immunity challenge, Kim Johnson, the next target to be voted out, won immunity, leading to the alliance having to resort to voting one of their own out. Ethan joined Lex and Kim Johnson in voting out Tom, carrying them into the Final 3. However, the Final 4 immunity challenge contained some controversy.

At the Final 3 immunity challenge, older tribe member Kim Johnson outlasted the two young, fit men to win immunity in an endurance challenge. With Johnson holding the power to choose who she would sit next to in the Final 2, she chose Zohn, believing that she could not win against either van den Berghe or Zohn and she thought Zohn deserved the money more than van den Berghe did.

In the end, Zohn beat out Kim Johnson in a 5-2 vote to become the Sole Survivor, gaining the votes of Kelly Goldsmith, Frank Garrison, Teresa Cooper, Tom Buchanan and Lex

Zohn was invited to participate in Survivor: All-Stars, which he gladly accepted. Originally part of the Saboga tribe, Zohn was immediately targeted as a previous winner, along with Survivor: The Australian Outback winner Tina Wesson. When Saboga lost immunity, the rest of the tribe decided to vote out Tina first, needing Zohn's strength to win future challenges. When Saboga lost immunity once again, Zohn was spared once more over physical liability Rudy Boesch, who had hurt his ankle previously.

In episode 5, Zohn and the rest of the Saboga tribe were disbanded after losing a challenge. Zohn and Jerri Manthey joined the Mogo Mogo tribe, while Jenna Lewis and Rupert Boneham joined Chapera. Later in that episode, Zohn joined the rest of his new tribe to vote out Survivor: Borneo winner Richard Hatch.

In episode 7, Zohn was on the outs when the alliance of Manthey, Lex van den Berghe, and Shii Ann Huang left him out in their decision to vote out Colby Donaldson. Zohn was shocked at the decision, feeling betrayed by old Survivor: Africa alliance member van den Berghe.

In episode 8, Mogo Mogo lost immunity once again, and Zohn, the last former winner, was voted out in 11th Place overall, by a vote of 4-1. He was the most successful of the four previous winners who competed on All-Stars, lasting longer than Wesson, Hatch and Jenna Morasca.

Zohn was a contestant on a February 28, 2005 episode of Fear Factor in which he competed against other reality TV competition winners, including his girlfriend Jenna Morasca, who was the winner of Survivor: The Amazon. He finished second, losing to former The Bachelorette winner Ryan Sutter. Later that year, he appeared on Kill Reality, which follows various reality television personalities as they film a horror movie called The Scorned.

In October 2006, Zohn appeared on an episode of the VH1 series Celebrity Paranormal Project. He and his team investigated alleged paranormal activity at the Warson Asylum for the Criminally Insane.

In 2008 Zohn hosted Earth Tripping, a six-episode TV series, in which he demonstrated how to be "an earth-friendly traveler", and shows viewers "how to employ new, natural and environmentally conscious methods when they travel". During the series Zohn visited New York City, Mexico City, Singapore, Kuala Lumpur, Santiago, Chile, and Buenos Aires, Argentina.

Zohn appeared in the 11th episode of the Discovery Channel show PitchMen, in which he presented the EZ Crunch Bowl, a cereal bowl he designed to in which the cereal is kept in the shallow end and the milk in the deeper end in order to keep the cereal "crunchy" and not soggy. The bowl was picked by the show's co-stars, Billy Mays and Anthony Sullivan, for manufacturing and marketing by Telebrands. The EZ Crunch Bowl was sent to Telebrands product engineers for improvement before being made available to the public.

Zohn has co-hosted of Outside Today on the cable TV network Outside Television.

Zohn posed nude (while holding a leaf to cover himself) for PETA's "I'd Rather Go Naked, Than Wear Fur" Campaign along with his girlfriend Jenna Morasca.

Zohn is Jewish and was born in Lexington, Massachusetts. On April 30, 2009, Zohn was diagnosed with a rare type of cancer called CD20-positive Hodgkin's lymphoma. He started chemotherapy in May 2009. On September 14, 2009, he disclosed that after three months of intensive chemotherapy, his cancer returned. He will be undergoing a new treatment, including a stem-cell transplant, to battle the rare form of Hodgkin's disease. Zohn received a "clean CT scan" in late April 2010 and remained in remission for nearly 20 months. In September 2011, Ethan confirmed that the cancer had returned in his chest.

Zohn began dating fellow Survivor champion Jenna Morasca after her victory on Survivor: The Amazon in 2003. They both live in Manhattan. They were eliminated in episode two of the 19th season of The Amazing Race. In February 2013, Zohn and Morasca confirmed that they had amicably ended their relationship. In early March 2013, Zohn announced via The Jeff Probst Show that he is indeed cancer free due to two rounds of stem cell transplants that he received from his brother.