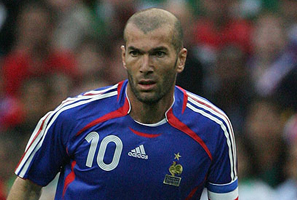 As a member and later captain of the French national team he participated in two World Cup finals - including winning the tournament in 1998 - and in three European Championships, winning that tournament in 2000.

Having gained fame in Europe as a playmaker for Juventus, Zidane attracted worldwide attention in the 1998 World Cup final with two headed goals against Brazil which won his country its first FIFA World Cup.

He also contributed to France's victory in Euro 2000, and at the club level he went on to win domestic championships in Italy and Spain with Juventus and Real Madrid respectively.

In the final of the 2001-02 UEFA Champions League he scored the winning goal for Real Madrid.

At the 2006 FIFA World Cup, he was named "Most Outstanding Player" of the tournament, receiving the Golden Ball, captaining the French side that reached the final.

However, Zidane's career ended in disgrace as he was dismissed in extra-time of the 2006 Final for headbutting Italian defender Marco Materazzi. The red card he received in the 2006 World Cup Final brought him to equal two negative disciplinary records (see FIFA World Cup records): most cautions for a player in World Cup games (six), and most sending-offs (two).

He was also named European Footballer of the Year in 1998.

In 2004, he topped the UEFA Golden Jubilee Poll as the "Best European football player of the past 50 years", and was included in the FIFA 100, PelÃ©'s list of the 125 greatest living footballers.

As originally announced on 25 April 2006, Zidane retired from professional football after the 2006 FIFA World Cup.

Source : Some of the information on this page came from a Wikipedia article and is licensed under the GNU Documentation License. ©2008 www.geneticmatrix.com.