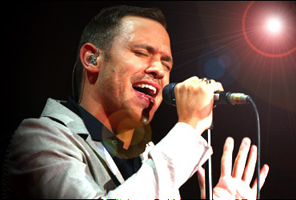 William Robert Young BA (Exon) (born 20 January 1979) is an English singer and actor. He rose to fame in 2002 after winning the inaugural UK Pop Idol contest. He has continued to work very successfully in music, and also as an actor.

Young was born in Wokingham, Berkshire, with a fraternal twin, Rupert. He also has an older sister, Emma. He was educated at Horris Hill preparatory school and Wellington College. He also studied at D'Overbroeck's College, Oxford.

Young read Politics at the University of Exeter and graduated with a 2:2 honours degree. At university, some of his haunts included Timepiece, The Old Firehouse, and Harry's, where he used to work. In September 2001, he became a student at the Arts Educational Schools in Chiswick, London, starting a three-year course in musical theatre with a scholarship.

In February 2002, Young came to national prominence by winning the ITV television programme contest Pop Idol. Contrary to press claims of being the underdog, after having beaten the widely accepted front-runner Gareth Gates in the final show, it emerged that Young had in fact gained the most votes in six out of the nine rounds of public voting. This was published in the Pop Idol book, which was released shortly after the programme.

Young's first single was a double A-side featuring Westlife's song "Evergreen" and "Anything Is Possible", a new song written for the winner of the show by Chris Braide and Cathy Dennis. In March 2002, this became the fastest-selling debut in UK chart history, selling 403,027 copies on its day of release (1,108,659 copies in its first week). It went on to sell over 1.7 million copies, and on the official list of the all-time best-selling singles in the UK issued later that year, it was ranked eleventh. "Anything Is Possible" won an Ivor Novello Award for Best Song Musically and Lyrically.

In October 2002, Young released his debut album, From Now On, which included "Evergreen" and "Anything Is Possible". It produced three singles: "Light My Fire", "The Long and Winding Road" (a duet with Gareth Gates, released as a double A-side with Gates's song "Suspicious Minds") and "Don't Let Me Down"/"You and I" (released in aid of Children in Need). He won his first BRIT Award in February 2003 as Best Breakthrough Artist.

Young's second album, Friday's Child, was released in December 2003. It features the singles "Leave Right Now", "Your Game" (which won Young his second BRIT Award in 2005) and "Friday's Child". In November 2005, Young released his third album, Keep On, which included the single "All Time Love", nominated in the Best British Single category at the 2007 BRIT Awards. Other singles from the album were "Switch It On" and "Who Am I".

In November 2007, Young's official website reported that he was in Los Angeles working on his fourth album, and had amassed a large number of tracks from which he would be making a short list for the album. On 29 September 2008, the album, entitled Let It Go, will be released, preceded by the single "Changes", which is to be released on 14 September.

In early 2002, Young joined his fellow Pop Idol contestants in a nationwide arena tour. The final concert at Wembley was in aid of The Prince's Trust, of which Young is an ambassador, together with Gareth Gates and Darius Danesh, the runner-up and third-placed contestant in Pop Idol. In June 2002, Young performed at the Queen's Jubilee Concert in the grounds of Buckingham Palace, singing "We Are the Champions" with Queen members Brian May and Roger Taylor.

During July 2002, Young sang at two concerts with the renowned songwriter Burt Bacharach at Hammersmith Apollo and at the Liverpool Summerpops event. In August 2002, he performed at the closing ceremony of the 2002 Commonwealth Games, singing "I Get the Sweetest Feeling" in the pouring rain. He was praised by the announcer, Grandmaster Flash, who said that it was not easy entering a talent show. November 2002 brought an appearance at the Royal Command Performance. In November 2003, Young performed the wartime song "A Nightingale Sang in Berkeley Square", accompanied by The Squadronaires, at the Royal British Legion Festival of Remembrance at the Royal Albert Hall in London.

Following a sell-out theatre tour in 2004, Young appeared at The Olympic Torch Concert, performing a duet of "Papa's Got a Brand New Bag" with soul legend James Brown. Later that year, he embarked upon his first solo arena tour, another sell-out success. He toured again at outside festival venues in mid 2005. In July 2005, he performed at Edinburgh 50,000 - The Final Push, the final concert of Live 8, a charity concert in Edinburgh to raise awareness of the plight of Africa, where he duetted with James Brown once again and also sang with One Giant Leap, Neneh Cherry and Maxi Jazz. In November 2005, Young appeared in his second Royal Command Performance.

In May 2006, he sang at The Prince's Trust 30th Birthday, which took place at the Tower of London. From 12 September until 2 October 2006, Young toured the UK with his Keep On Live tour, which included the songs taken from his album Keep On and a selection of past songs. The official merchandise range for the tour, highlighted by the press, included a "tip and strip" pen which, when turned over, reveals Young in his underpants. In October 2006, Young sang at Nitin Sawhney's concert in the BBC Electric Proms series of concerts. He followed this by performing in South Africa for Nelson Mandela's Unite of the Stars charity concerts. In December 2006, he performed at the Dolce Vita Ball in London.

In July 2007, he appeared at the Concert for Diana at the new Wembley Stadium. Young was the headline act at the Proms in the Park, which took place in Hyde Park in September 2007 as part of the Last Night of the Proms. In September 2007, Young performed at Ronnie Scott's Jazz Club with the Vanguard Big Band. Young took part in the Little Noise Sessions, a series of intimate, acoustic gigs for the learning disability charity, Mencap. He performed in November 2007 with special guests at Islington's Union Chapel.

In April 2008, Young again appeared at Ronnie Scott's Jazz Club with the Vanguard Big Band. Young is to perform at various festivals during mid 2008, including Glastonbury, T In the Park in Scotland and Bestival on the Isle of Wight.

On 24 August 2008 Young will be appearing in the Olympic Party which is scheduled to take place in The Mall, London

Young added acting to his repertoire when he accepted a role in the BBC film Mrs. Henderson Presents, starring Judi Dench and Bob Hoskins, in which he played Bertie. The film was released in the UK in November 2005 to excellent reviews—not least for Young's performance as both actor and singer in the film. The scene, in which Young appears naked, postdated his "absolutely thrilled" acceptance of the British male Rear of the Year Award 2005, an accolade to add to the Most Stylish Male Music Star, Best Bod, Sexiest Star, Best Dressed and Best Hair awards he had already won.

Young trod the boards in the Royal Exchange Theatre's production of The Vortex by Noel Coward. This production ran from January to March 2007 and Young played the leading role of Nicky Lancaster. Critics, including the well respected and acclaimed critic Nicholas de Jonghe, thought Young played the role of Nicky just as it should have been played and he wrote, "revelatory Will finds key to Coward classic".

In October 2007 Young narrated an audio version of the Roald Dahl novel Danny, the Champion of the World.

In November 2004, Young presented a documentary entitled Runaways as part of the Children in Need campaign, highlighting the problems facing distressed teens who run away from home, and the plight they were in being picked up off the streets and railway stations by pimps who offered them work and drugs. The children did not know where to go for immediate help unless they were picked up by the police and sent to a refuge centre.

During June 2007 a series of documentaries entitled Saving Planet Earth was shown on BBC Television. Young filmed an episode about saving the gorillas of West Africa during his visit to Africa earlier in the year.

Young supports the charity Women's Aid, about which he wrote: "I am proud to put my name beside this cause, and hope that I might be able to help more people affected by the terrors of domestic violence, as well as help to create a wider awareness within our society."

Young also supports Mencap—about which he wrote, "I'm very much in this for the long term, and I'd like to help continue to break down peoples' misconceptions and prejudices"—, The Children's Society Safe and Sound Campaign, and Positive Action Southwest (PASW) , for which he performed at his first solo concert, in July 2003, at Killerton House, Exeter.

Young has been an ambassador for The Prince's Trust since 2002, and performed at the 30th anniversary concert in the grounds of the Tower of London.

Together with Dame Helen Mirren, Helena Bonham Carter and Martin Freeman, Young appeared in a series of advertisements during the Christmas period 2007 for Oxfam; "Oxfam Unwrapped".

In March 2002, Young revealed that he was gay, to pre-empt a tabloid newspaper that was preparing to run a story outing him. He also stated that he had never hidden, and was comfortable with, his sexuality. He also reaffirmed this to the BBC.

In 2005, Young met comedian David Walliams and the pair became good friends, with Young appearing at the Little Britain live stage show in Manchester, and later recording a podcast with Walliams, in which they chatted about various aspects of Young's career. The four parts are available on his website and iTunes.