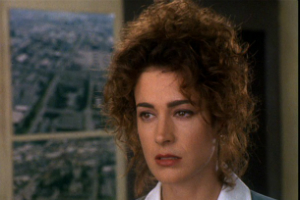 Sean Young (born November 20, 1959) is an American actress, best known for her performance in films from the 1980s such as Blade Runner, Dune, No Way Out and Ace Ventura: Pet Detective.

Young was born as Mary Sean Young in Louisville, Kentucky, the daughter of Lee Guthrie, a screenwriter, public relations executive, and journalist, and Donald Young, a television news producer and journalist. She attended Cleveland Heights High School in Cleveland Heights, Ohio, and then transferred to and graduated from Interlochen Arts Academy in Interlochen, Michigan. She has also attended the School of American Ballet in New York. Before becoming an actress, Young worked as a model and dancer.

Young began her film career in 1980 in the film Jane Austen in Manhattan, followed by a small role in the 1981 film Stripes, and played female lead opposite Harrison Ford in the futuristic classic Blade Runner (1982). She had a small role in the film Wall Street as the wife of Michael Douglas' character. Her role was originally intended to be larger, but was significantly reduced due to clashes with Oliver Stone.

One of her most prominent roles was as the lover of a ruthless Washington politician in 1987's No Way Out, playing opposite Kevin Costner. Other notable credits include Dune, Fatal Instinct, and Baby: Secret of the Lost Legend.

In 1988, Young appeared in The Boost with James Woods. Woods later sued her for harassing him and his then-fiancée, alleging that, in addition to other disruptive behavior, Young left a disfigured doll on his doorstep. Young denied the allegations and claimed that Woods filed the lawsuit out of spite. Young stated, "It was a crush being turned down, that's all.... So sue me! And he  did." The suit was settled out of court in 1989.

She was cast as Vicki Vale in Tim Burton's successful 1989 film Batman. During rehearsals, however, she broke her arm after falling off a horse and was replaced by Kim Basinger. In an unsuccessful attempt to win the role as Catwoman (which was offered to Annette Bening but ultimately played by Michelle Pfeiffer after Bening became pregnant) in the sequel Batman Returns, Young constructed a homemade Catwoman costume and attempted to confront Burton and actor Michael Keaton during production.

As the crazed heiress Twinkle in the 1992 screwball comedy Hold Me, Thrill Me, Kiss Me, Young played a tongue-in-cheek caricature of her public image at the time.

Young was cast as Tess Trueheart in the 1990 movie Dick Tracy, but she was fired for not appearing maternal in the role. Young later claimed she was fired because she rebuffed Warren Beatty's advances, a claim Beatty denies. In 1991, she was awarded the Worst Actress and the Worst Supporting Actress Razzies for her roles in A Kiss Before Dying. She played a supporting role in the 1994 comedy Ace Ventura: Pet Detective. During most of the 1990s she resided in Sedona, Arizona, and her career cooled. Sean Young reprised her role as Rachael in the 1997 Blade Runner video game. Her face was scanned and reproduced in 3D, one of the first times such technology was used in a game.

Since 2000, Young has appeared in a variety of independent films and made guest appearances on television, including roles in Poor White Trash, Mockingbird Don't Sing, Sugar & Spice, Boston Public, and Reno 911! In 2005, she spent four months in Russia filming the miniseries Esenin, in which she played dancer Isadora Duncan. She also had a small role on the CW's One Tree Hill in 2007.

In late 2007, Young finished work on two films, The Man Who Came Back and Haunted Echoes.

Young appeared on The Young and the Restless in June 2010 as Canadian barmaid Meggie McClain, alongside good friend Eric Braeden. She returned to the show on July 14 in a recurring role, which lasted through early November 2010.

In 2010, she was cast on the first season of the ABC show Skating with the Stars as a celebrity contestant who skated with professional skater Denis Petukhov. She was the first celebrity to be eliminated.

In October 2011, Young appeared on the CBS television show Late Show with David Letterman. During the interview she described how she was now looking for movie work after raising her two sons, and produced an amusing short video clip promoting her job search which Letterman played. She has since been cast in the new film about Nikola Tesla slated for release in 2013 called Fragments From Olympus—The Vision of Nikola Tesla.

In 1990, Young married Robert Lujan, with whom she has two sons, Rio Kelly and Quinn Lee. The couple divorced in 2002. However, during Young's stay in rehab in 2011, which was depicted on Celebrity Rehab with Dr. Drew, Lujan was identified as her husband, both when he visited her during Family Weekend in Episode 6, and when he and Young spoke to Doctors Drew Pinsky and John Sharp about their relationship.

In January 2008, Young checked herself into rehab for alcohol abuse.

On June 9, 2013, Young performed in a benefit skating event at the Ice Theater of New York. She competed in a Celebrity Skating competition against Michael Buckley, YouTube personality, and Tim Morehouse, US Olympic Fencing silver medalist.