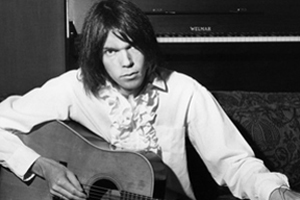 His work is characterized by deeply personal lyrics, distinctive guitar work, and an instantly recognizable nasal tenor (and frequently alto) singing voice. Although he accompanies himself on several different instruments—including piano and harmonica—his style of hammer-on acoustic guitar and often idiosyncratic soloing on electric guitar are the lynchpins of a sometimes ragged, sometimes polished, yet consistently evocative sound.

Although Young has experimented widely with differing music styles, including swing, jazz, rockabilly, blues, and electronica throughout a varied career, his best known work usually falls into either of two distinct styles: folk-esque acoustic rock (as heard in songs such as "Heart of Gold" (sample (helpÂ·info)), "Harvest Moon" and "Old Man") and electric-charged hard rock (in songs like "Cinnamon Girl", "Rockin' in the Free World" and "Hey Hey, My My (Into the Black)").

In more recent years, Young has started to adopt elements from newer styles of music, such as industrial, alternative country and grunge, the latter of which was profoundly influenced by his own style of playing, often bringing him the title of "the godfather of grunge".

He is also an outspoken advocate for environmental issues and small farmers, having co-founded the benefit concert Farm Aid, and in 1986 helped found The Bridge School, and its annual supporting Bridge School Benefit concerts, together with his wife Pegi.