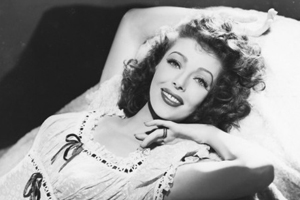 American film actress with her own TV show in the '50s. Starring in movies from the age of four, she and her two sisters made successful film careers, making the transition to "talkies" smoothly. She signed with Fox in the early '30s, appearing in over 90 films during her career. During the '30s she played the smiling martyr endlessly, making so many films that she was called "the beautiful hack." An elegant beauty with rosy complexion, full lips and prominent cheekbones, she won an Academy Award for "The Farmer's Daughter," 1947, "Rachal and the Stranger," 1948, an Oscar nomination for "Come to the Stable," 1949 and another for "Cause for Alarm" in 1951.

Young retired from film in 1953 to begin her successful TV show "The Loretta Young Show" that ran for eight years with more than 300 episodes. She received three Emmy Awards for her dramas. In 1961 she wrote an autobiography, "The Things I Had To Learn." She has returned to TV numerous times since then, in 1986 with the drama "Christmas Eve."

An adopted child, her parents divorced when she was three. Her mother moved the family to Hollywood where she opened a boarding house. As an adult she worked with unwed mothers and youth programs for years. For many years she kept her own secret of a love child, the result of an impetuous affair with Clark Gable during their film, "Call of the Wild." As Gable was married to his second wife and Young, age 19 and a devout Catholic, could not risk scandal, she went to London for the duration of the pregnancy and arranged to have the child adopted after her birth in California. Her daughter, Judy Lewis, a psychotherapist, did not learn of her parentage until age 23. When she finally met her mother, Young was married to Tom Lewis and not eager to go public with the story of her indiscretion.

Young eloped with Grant Withers in 1930; the marriage was annulled within a year. She married TV executive Tom Lewis and divorced in 1969 with two sons and one adopted daughter. Her third marriage was to fashion designer Jean Louis Berthault in 1991, after being close friends for 40 years; she was widowed 4/20/1997.

In 2000 the actress gallantly downplayed her condition to her friends and fans. She checked into the St. John's Health Center in Santa Monica, CA under an alias but her ordeal of massive ovarian and colon tumors were delivered to the news when an impending operation was necessary. On 7/03/2000 surgeons removed a large tumor from her colon during a three-hour surgery. Released to her sister's home, Young died on 8/12/2000, with her children, Christopher Lewis, 56, Peter Lewis, 55, Judy Lewis, 64, and her sister, Georgiana Montalban, 64, around her.