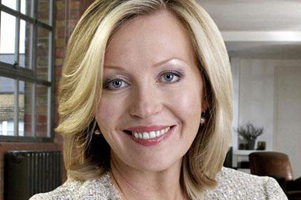 Kirsty Jackson Young (born 23 November 1968) is a Scottish television presenter and radio presenter. She is the main presenter of Crimewatch and Desert Island Discs. She is married to millionaire club owner Nick Jones.

Young was born in East Kilbride. Her media career began in 1989 when she worked as a continuity announcer for BBC Radio Scotland. In 1992 she moved to Scottish Television where she presented the main evening news programme, Scotland Today and also hosted her own chat show, Kirsty. She left Scottish TV and Scotland itself in 1996. That year she guest presented The Time, The Place and also featured on the Holiday programme. She co-hosted consumer show The Street on BBC Two. In 1997, she joined the news team of the new terrestrial channel, Channel 5. She left Channel 5 to join ITV in 1999 and hosted a quiz show called The People Versus in 2000. In 2001, she became the co-presenter of the ITV Evening News with Dermot Murnaghan and, later the same year, after giving birth to her first child, she decided to return to Channel Five.

Young returned to Channel 5 in 2002 and hosted both the 5.30pm and 7pm editions until her maternity leave began in January 2006, when she was replaced by John Suchet and Helen Fospero. In November 2003, she guest-presented an edition of Have I Got News for You. As of June 2012 she has guest-presented ten times, and has appeared on the show eleven times in total. She appeared on Room 101 in 2004 during which she nominated cowboy boots, Britney Spears and 'baby on board' stickers among her pet hates.

In June 2006, it was announced that Young was to be the new presenter of the long-running BBC Radio 4 programme Desert Island Discs, replacing Sue Lawley; which she began on 1 October 2006. She then returned to Five News on 28 September 2006, but in 2007, Young announced that she would be leaving Five News in the autumn, following ten years as its head anchor. On 29 August 2007, she presented her last show for Five News.

On 29 September 2007, it was announced that Young would replace Fiona Bruce as a presenter on the BBC's Crimewatch programme. There had been rumours in 1999 that Young was to host the show after the murder of Jill Dando, before Fiona Bruce took over.

Young attended Stirling High School. She returned in June 2008 to officially open the school's new building. She admitted to suffering from bulimia as a teenager on the first episode of her first TV show. In a later interview she said "It only happened for a very fleeting few months and I dealt with it myself."

Young met businessman Nick Jones, (founder of Soho House club and owner of Babington House) in 1998 and they married in September 1999. She has two daughters, Freya (born February 2001) and Iona (born April 2006). She has two stepchildren, Jones' children from his first marriage, Natasha and Oliver. Both Young and Jones are supporters of Rangers F.C..