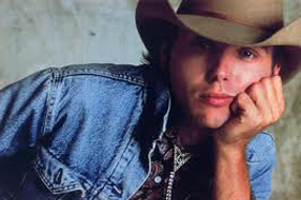 American 6 ft. tall country western singer, recording artist, and actor with a country-western style close to his hillbilly past. When he tried to sell his style to Nashville music producers in the country music capital, they complained he was too country for their tastes. Yoakam found his niche in Los Angeles playing alongside punk recording bands on the Sunset Strip. After releasing his sixth album, he starred in a limited run play, "Southern Rapture" directed by his friend Peter Fonda in Los Angeles.

Yoakam was a serious student in rural Pike Floyd Holler, Kentucky. As a child, he often stayed late in the library reading encyclopedias. The family moved to Columbus, Ohio where his dad owned a gas station and his mom worked as a key punch operator. Dwight was the oldest of three children. At two, he picked up his daddy's guitar. He slowly started teaching himself how to play by strumming along to his parents' Hank William records. He wrote his first song when he was eight years old. He later attended Ohio State University for two years and moonlighted on the honky-tonk circuit.

Yoakam dropped out of college and tried his luck in Nashville. After he was turned down by record companies, he packed his belongings and moved to Los Angeles in 1978. He wrote songs and tried to make ends meet by delivering packages, driving a truck and working on a loading dock. Though the punk movement in full swing, Yoakam found people interested in his country music. He felt that the punk scene helped to develop the Los Angeles cowpunk movement combining gritty rock with traditional country elements. In 1985, "The Blasters" went on a concert tour with Dwight Yoakam as the band's opening act. He was signed to a record contract with Warner Bros. records.

In March 1986, his debut album "Guitars, Cadillac's, Etc., Etc.," appeared in the record stores. The album began to climb the country music charts and soon admirers like Buck Owens and Keith Richards were phoning their approval to the record company. His first album was nominated for a Grammy award as best country-western recording. In the next four years, Yoakam went on to produce records and sell over six million albums. He landed film roles in "Red Rock West," 1993 and "Painted Hero," 1995. When he is not recording songs, he spends his time reading over Hollywood movie scripts looking for the role to make him a rising star in the independent film scene.

Yoakum lives a solitary and introspective life. He would like to marry but worries his quiet, creative lifestyle might prove to be too difficult for a wife. He met actress Sharon Stone while shooting ad pictures for Ebel watches. The couple had a four-week relationship that ended on a sour note. After escorting Stone to the Academy Awards the actress commented, "A dirt sandwich is better than Dwight Yoakam."

He lives in a spotless, clean Spanish style Hollywood Hills home. A neat-freak, the singer must have his kitchen and pantry tidy and orderly. He watches his weight and wears 28-inch waist skin-tight ripped Levi jeans of which he owns over 40 pairs along with an assortment of country boy Stetson hats. Yoakam collects the paintings of renowned Southwestern painter, C.J. Wells. He owns a 24-acre ranch in the Ventura mountains where he boards his 11 horses. His favorite pastime is horseback riding. He does not smoke, drink or eat red meat.

In late 1997, Yoakam began dating actress Bridget Fonda. While filming "Panic Room," 2001, he accidentally cracked some ribs and burst bursa sacs in his elbow. The star of the film, Jodie Foster, said he was "an accident waiting to happen."