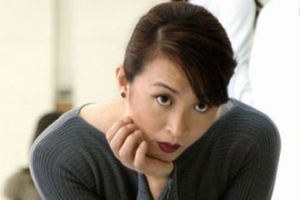 Jin Xing (born August 13, 1967 in Shenyang, Liaoning) is a ballerina, modern dancer, choreographer and actress from the People's Republic of China, and owner of the contemporary dance company "Shanghai Jin Xing Dance Theatre". Although usually credited as Jing Xing, the proper pinyin spelling is Jin Xing. She is one of the first few transgender women officially recognised by the Chinese government.

Born as a male to ethnic Korean parents, Jin studied in a local Korean elementary school. Her father worked in the police department. She was praised as highly intelligent, and had won abacus contests many times (Levey). She expressed high enthusiasm in dance performance. At the age of 9 she joined the People's Liberation Army to receive dance and military training (Levey; Li); she became a member of the military's dance troupe, and eventually attained the rank of colonel. She experienced strong transsexual desires early in life. She said she would stay outside during rain, and wish that a lightning strike would turn her body female (Levey). Later she won the national dance contest with a piece of Central Asian ethnic dance.

1987, Jin went to New York to study modern dance for four years, and then traveled and performed in Europe, and taught dance in Rome from 1991 to 1993, followed by a world tour, and returned to China at the age of 26 (Jin). She underwent sex reassignment surgery in 1996 (Li). Her left leg was paralyzed for a while after the surgery (Levey). After the recovery she went to Shanghai to choreograph and train students. At the age of 33 she adopted a son. She now lives with her three adopted children and her German husband in Shanghai.

Jin Xing's works are "startlingly original and provocative" (Li). These include The Imperial Concubine Has Been Drunk for Ages (Guifei zui jiu, an adaptation of the famous Peking opera title) and Cross Border–Crossing the Line (Cong dong dao xi, a co-operation with British pianist Joanna MacGregor).

Her film debut was in the Korean movie Resurrection of the Little Match Girl in 2002. In 2005, she appeared in the Thai movie Tom-Yum-Goong as the villain Madam Rose. She later participated in the Stock Exchange of Visions project in 2007.