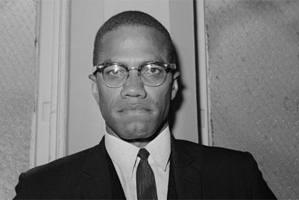 American activist who came from humble roots to rise to a position of national prominence as a civil rights activist. As a youthful black rebel, he was convicted of burglary in 1946 and served prison time. In 1963, he formed the Organization of Afro-American Unity (OAAU). He took the Moslem name of El-Hajji Malik El-Shabazz; however, he was suspended as a Muslim minister on 23 November 1963 and expelled from the Black Muslim group of the Nation of Islam. He promptly formed his own religious sect on 8 March 1964.

Malcolm’s father was a Baptist minister who belonged to the United Negro Improvement Association. This group advocated that blacks return to Africa because they could find no peace in America. The Ku Klux Klan harassed his father and their Omaha home was burned down. The family moved to Lansing, Michigan in 1929. In his autobiography, Malcolm recalled that his father gave rousing sermons - but beat his wife and children. He attributed this to his father's self-hatred, a result of brainwashing by whites.

Malcolm's dad died a violent death in 1931 and Malcolm attributed his death to the Klan, though the Perry biography presents evidence that Little's death was from an accident. At any event, the boy was left fatherless and State welfare workers soon began harassing Malcolm's mother, grief stricken over her husband's death. She suffered a breakdown and was institutionalized until 1963. Malcolm was separated from his siblings and lived in foster families where he learned to steal and fight but retained his personal ambitions. His English teacher discouraged him from trying to become a lawyer, saying he should learn to work with his hands instead.

After Malcolm went to live with his sister in Boston, he became a gambler and thief along with his work of shining shoes at the Roseland State Ballroom. He dealt bootleg liquor and illegal drugs and eventually landed in jail, being sentenced in 1946 to ten years for burglary.

While in prison, Malcolm was introduced to the teachings of Elijah Muhammad and the Nation of Islam. The group believed in the racial superiority of blacks and emphasized scrupulous personal habits, including cleanliness and perfect grooming. It forbade smoking, drinking, and eating pork along with other Muslim dietary restrictions.

Out of prison in 1952, Malcolm went to work for Elijah Muhammad and was soon named assistant minister to Muslim Temple No. One in Detroit. He spent nine years in the movement and became a national minister, the voice of the Nation of Islam. Although they shared the same goals, he had major philosophical differences with the Rev. Martin Luther King.

He also began to question the Nation of Islam ideals. His conflict with Elijah Muhammad in 1963 made headlines. When Malcolm discovered Muhammad was guilty of adultery, which was forbidden by the Nation of Islam, he was appalled at the leader's hypocrisy. He left the group in 1964 to form his own group, Muslim Mosque, Inc. and the Organization of Afro-American Unity. He regularly received death threats and his home was firebombed on 14 February 1965. His wife and four daughters were unharmed but his house was destroyed. A week later, he was publicly assassinated while giving a speech at the Audubon Ballroom in Harlem NY by three members of the Nation of Islam, on 21 February 1965.

The trial began on 21 January 1966 of the three defendants who were convicted on 11 March 1966. Later evidence was presented that caused doubt that the correct perpetrators had been caught.