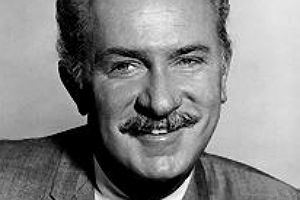 Keenan Wynn (July 27, 1916 – October 14, 1986) was an American character actor. His expressive face was his stock in trade, and though he rarely carried the lead role, he got prominent billing in most of his film and television parts.

Wynn was born in New York City as Francis Xavier Aloysius James Jeremiah Keenan Wynn, the son of vaudeville comedian Ed Wynn and wife, the former Hilda Keenan. He took his stage name from his maternal grandfather, Frank Keenan, one of the first Broadway actors to star in Hollywood. His father was Jewish and his mother was of Irish Catholic background.

Ed Wynn encouraged his son to become an actor, and the two appeared together in the original Playhouse 90 television production of Rod Serling's Requiem for a Heavyweight. The son was returning the favor: according to radio historian Elizabeth McLeod, it was Keenan who had helped his father overcome professional collapse and a harrowing divorce and nervous breakdown to return to work a decade earlier, and who now helped convince Serling and producer Martin Manulis that the elder Wynn should play the wistful trainer. He also appeared in a subsequent TV drama detailing the problems they had experienced while working on that show called The Man in the Funny Suit. In it, the Wynns, Serling, and much of the cast and crew played themselves. Keenan also featured in another Rod Serling production, a The Twilight Zone episode entitled, "A World of His Own" (1960) as playwright Gregory West, who uniquely caused the series's creator Rod Serling to disappear.

In the 1959-1960 television season, Wynn co-starred with Bob Mathias in NBC's The Troubleshooters, an adventure program about unusual events surrounding an international construction company. Wynn played the role of Kodiak, the "troubleshooter", for Mathias's Frank Dugan.

He appeared in numerous television series, such as the ABC/Warner Brothers drama, The Roaring 20s, The Islanders, and the ABC western series, The Travels of Jaimie McPheeters.

Wynn became a regular on TV's Dallas during 1979 to 1981, playing the part of former Ewing family partner-turned-enemy Digger Barnes. David Wayne, a friend of his, was cast for the first season, but was unable to continue because of Wayne's co-starring role in the CBS series, House Calls, starring Wayne Rogers.

Wynn was initially cast in Superman (1978) to play Perry White (the boss of Clark Kent and Lois Lane at the Daily Planet) in April 1977. However, by June (production had moved to Pinewood Studios in England), Wynn collapsed from exhaustion and was rushed to hospital. He was replaced by Jackie Cooper. In 1983, he guest starred on one of the last episodes of Taxi. In 1984, he starred in the television film Call to Glory, which later became a weekly television series.

Wynn was married to former stage actress Eve Lynn Abbott (1914–2004) until their divorce in 1947, whereupon Abbott married actor Van Johnson. One son, actor and writer Ned Wynn (born Edmond Keenan Wynn) wrote the autobiographical memoir We Will Always Live In Beverly Hills. His other son, Tracy Keenan Wynn, is a screenwriter whose credits include The Longest Yard and The Autobiography of Miss Jane Pittman (both 1974). His daughter Hilda was married to Paul Williams. He was an uncle by marriage to the Hudson Brothers.

In his later years, Wynn undertook a number of philanthropic endeavors and supported several charity groups. He was a long-standing active member of the Westwood Sertoma service club, in West Los Angeles. During his last few years, Wynn suffered from pancreatic cancer, which caused his death in 1986. His ashes are interred in Glendale's Forest Lawn Memorial Park.