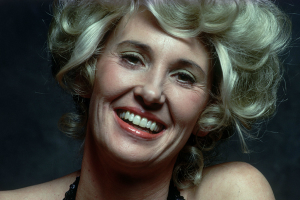 American country singer, named the Country Music Association's Female Vocalist-Of-The-Year three times. Tammy's life seemed like something right out of a country Western song. From 1976-1978 a series of calamities befell her that including being kidnapped at gunpoint and being beaten and choked in October 1978.

Starting at age 17, she was married five times with four daughters from her first marriage and one daughter from her third. Tammy left her husband while still pregnant. She worked as a beautician to help pay her children's doctor bills: one of the kids suffered from spinal meningitis.

Tammy began singing in local clubs and on the radio. "Apartment No. 9" was her first single and a minor hit in 1966. Her next 32 releases were all No.1 country hits, an industry record, and as a career total, she released more than 50 albums which sold over 30 million copies.

Her third husband was also a superstar, country singer George Jones. They were known as "Mr. & Mrs. Country Music." George was an abusive alcoholic, however, and Tammy divorced him in 1965. In the following years, someone set fire to her tour bus and 15-bathroom mansion. She was assaulted in 1978. After failed affairs with Burt Reynolds and Rudy Gatlin, she earned the nickname, "The Heroine of Heartache."

Her biggest hit were "Stand by Your Man" and "D-I-V-O-R-C-E." In her later years, Tammy collaborated with other singers and groups in joint releases. She joined Dolly Parton and Loretta Lynn in 1993 to produce the very popular "Honky Tonk Angels" trio album. She also worked with Sting, Wynonna Judd, and Elton John.

At one time she suffered from a drinking problem and a pain-killer drug addiction. After three years of drug dependency, she was admitted into the Betty Ford clinic. She had ulcers and a hiatus hernia, as well, and has had at least ten major operations since 1973.

In Nashville, 4/14/1999, a medical examiner performed an autopsy on the remains of Wynette to determine the cause of death. It was determined that she had died of heart failure caused by damage from repeated blood clots.