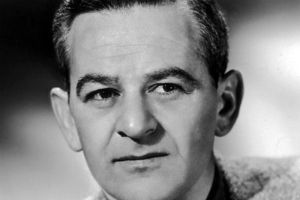 French-American director who made his debut at the age of 25 and, in his first two years, turned out 40 two-reel Westerns. He received twelve Oscar nominations for Best Director and three for Best Producer. He won the Academy of Motion Picture Arts and Sciences' Irving G. Thalberg Memorial Award for lifetime achievement. His 60 films included the three for which he won Best Director Oscars, "Mrs. Miniver," 1942, "Best Years Of Our Lives," 1946 and "Ben Hur," 1957.

Raised in Europe, Wyler made an early transition to the U.S. to work where he was offered a job in his Uncle Carl's Universal studios mailroom in New York. Eventually he transferred to Hollywood where he worked as a propman, grip, script clerk, cutter, casting director and assistant director. His skills were reinforced by a business education and the sure instincts of a superb craftsman. At 19 he made his way to Hollywood and at 23 became Universal Studios’ youngest director. He got his start as a studio assistant errand boy that began at Universal by sweeping sets at night. Wyler worked on early pictures such "Hunchback of Notre Dame" starring Lon Chaney and made a total of 32 silent movies.

Wyler flew in B-17 combat raids over Germany in WW II. He lost most of his hearing during the filming of a war film, "Memphis Belle." His documentary films of WW II addressed everything from supply shortages to the horrors of war.

He was famous for his dramatic films but also liked to make comedies like "The Good Fairy" (1934) starring Margaret Sullavan. His comedy "Roman Holiday," 1953, starred Audrey Hepburn in a debut which earned her an Oscar. Known as a demanding director, his skill held up with "Funny Girl," 1967, when Barbra Streisand also won an Oscar for her debut film.

Wyler's pictures were nominated for an incredible total of 127 Academy Awards and he was awarded 38 Oscars.

Wyler married Margaret Sullavan during the filming of "The Good Fairy," 1934, but after two years they divorced. He had an affair with Bette Davis.

Wyler died of a massive heart attack on 7/27/1981, Beverly Hills, CA., having carved out a name for himself of "the greatest of all American directors."