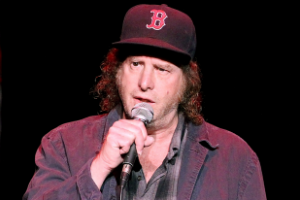 Steven Alexander Wright (born December 6, 1955) is an American comedian, actor and writer. He is known for his distinctly lethargic voice and slow, deadpan delivery of ironic, philosophical and sometimes nonsensical jokes, paraprosdokians, and one-liners with contrived situations.

Wright was born in Mount Auburn Hospital in Cambridge, Massachusetts, and grew up in Burlington, Massachusetts, one of four children of Lucille “Dolly” (née Lomano) and Alexander K. Wright. He was raised Catholic. His mother was Italian American and his father was of Scottish descent. Wright's father, an electronics technician who "tested a lot of stuff for the Apollo space program," became a truck driver after that program ended.

Wright spent two years obtaining an associate's degree from Middlesex Community College in Bedford, Massachusetts, before enrolling at Emerson College. He graduated from the latter in 1978 and began performing stand-up comedy in 1979 at the Boston comedy club the Comedy Connection. He cites George Carlin and Woody Allen among his influences.

In 1982 Peter Lassally, executive producer of The Tonight Show, noticed Wright performing on a bill with other local comics at the comedy club Ding Ho, in Cambridge's Inman Square, a venue Wright described as "half Chinese restaurant and half comedy club. It was a pretty weird place". Lassally booked Wright on The Tonight Show, where the comic so impressed host Johnny Carson and the studio audience that Wright was brought back less than a week later. In May 2000, Wright and other Ding Ho alumni, including Lenny Clarke, Barry Crimmins, Steve Sweeney, Bill Sohonage, and Jimmy Tingle, appeared at a reunion benefit for comic Bob Lazarus, suffering from leukemia.

Wright's 1985 comedy album was entitled I Have a Pony. It was released on Warner Bros. Records, received critical acclaim and was nominated for the Grammy Award for Best Comedy Album. The success of this album landed him an HBO special which he recorded as a live college concert performance, A Steven Wright Special. By now Wright had firmly developed a new brand of obscure, laid-back performing and was rapidly building a cult-like mystique and eclectic following of "hip", savvy fans. His opening act for the HBO concert was fellow "Ding Ho" comedy alumnus Bill Sohonage who recounts that Steven's ultra-casual, nearly catatonic demeanor was no act. "He walked into my dressing room, minutes before I was to take the stage, and asked if he could borrow a shirt, as his had a giant pizza stain. You would think it might be normal to be a little nervous going on a college stage in front of 23,000, let alone having HBO out there filming but as I passed by his room while walking on-stage I saw him sound asleep and loudly snoring". The performance would become one of HBO's longest running and most requested comedy specials and propel him to huge success on the college arena concert circuits.

In 1989 he and fellow producer Dean Parisot won an Academy Award for their 30-minute short film "The Appointments of Dennis Jennings", directed by Parisot, written by Mike Armstrong and Wright, and starring Wright and Rowan Atkinson. Upon accepting the Oscar, Wright said, "Now I'm sorry I cut out that last hour-and-a-half." In 1992 Wright had a recurring role on the television sitcom Mad About You. He supplied the voice of the radio DJ in writer-director Quentin Tarantino's film Reservoir Dogs that year. "Dean Parisot's wife Sally Menke is Quentin Tarantino's  editor, so when she was editing the movie and it was getting down toward the end where they didn't have the radio DJ yet, she thought of me and told Quentin and he liked the idea", Wright explained in 2009.

Numerous lists of jokes attributed to Wright circulate on the Internet, sometimes of dubious origin. Wright has stated, "Someone showed me a site, and half of it that said I wrote it, I didn't write. Recently, I saw one, and I didn't write any of it. What's disturbing is that with a few of these jokes, I wish I had thought of them. A giant amount of them, I'm embarrassed that people think I thought of them, because some are really bad".

After his 1990 comedy special Wicker Chairs and Gravity, Wright continued to do stand-up performances, but he was largely absent from television, only doing occasional guest spots on late-night talk shows. In 1999 he wrote and directed the 30-minute short "One Soldier", "about a soldier who was in the Civil War, right after the war, with all these existentialist thoughts and wondering if there is a God and all that stuff".

In 2006 Wright produced his first stand-up special in 16 years, Steven Wright: When The Leaves Blow Away, originally airing on Comedy Central on October 21, 2006. Its DVD was released April 23, 2007. On September 25, 2007 Wright released his second album, I Still Have a Pony, a CD release of the material from When The Leaves Blow Away. It was nominated for the Grammy Award for Best Comedy Album but it lost to The Distant Future by Flight of the Conchords.

Wright is a regular guest on The Late Late Show With Craig Ferguson.

Steven Wright was awarded an Oscar in 1989 for Best Short Live-Action Film for "The Appointments of Dennis Jennings", which he co-wrote (with Michael Armstrong) and starred in.

On December 15, 2008, Wright became the first inductee to the Boston Comedy Hall of Fame.

In a 2005 poll to find The Comedian's Comedian, he was voted amongst the top 50 comedy acts by fellow comedians and comedy insiders. He was named #23 on Comedy Central's list of the 100 greatest stand-up comics.

While not well known for works outside of the comedy realm, Steven Wright is also a musician and has also recorded several non-comedy songs with his friend and occasional actor Mark Wuerthner. Wright also has an interest in painting.

Beginning in 2009, Steven Wright occasionally appeared on The Late Late Show with Craig Ferguson as a visiting celebrity, dropping by the show to help with the fan-mail segment. He joins a small cadre of Hollywood celebrities who lend their support to the show in this way.