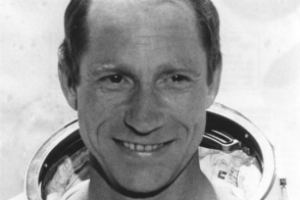 Alfred Merrill Worden (born February 7, 1932) is an American astronaut who was the command module pilot for the Apollo 15 lunar mission in 1971. He is one of only 24 people to have flown to the Moon.

The son of Merrill and Helen Worden, he was born in Jackson, Michigan. Worden attended Dibble, Griswold, Bloomfield and East Jackson grade schools and completed his secondary education at Jackson High School. He received a bachelor of military science degree from the United States Military Academy at West Point, New York, in 1955 and master of science degrees in Astronautical/Aeronautical Engineering and Instrumentation Engineering from the University of Michigan in 1963. He also received an honorary doctorate of science in Astronautical Engineering from the University of Michigan in 1971.

He attended Randolph Air Force Base Instrument Pilots Instructor School in 1963 and served as a pilot and armament officer from March 1957 to May 1961 with the 95th Fighter Interceptor Squadron at Andrews Air Force Base, Maryland.

Prior to his arrival for duty at the Johnson Space Center, he served as an instructor at the Aerospace Research Pilots School from which he graduated in September 1965. He is also a February 1965 graduate of the Empire Test Pilots' School in Farnborough, England.

Worden was one of the 19 astronauts selected by NASA in April 1966. He served as a member of the astronaut support crew for the Apollo 9 flight and as backup command module pilot for the Apollo 12 flight.

Worden served as command module pilot for Apollo 15, which flew from July 26 to August 7, 1971. His companions on the flight were David Scott, spacecraft commander, and James B. Irwin, lunar module pilot. Apollo 15 was the fourth manned lunar landing mission and the first to visit and explore the moon's Hadley Rille and Montes Apenninus which are located on the southeast edge of the Mare Imbrium (Sea of Rains). Apollo 15's achievements include the largest payloads placed in earth and lunar orbits, the first scientific instrument module bay flown and operated on an Apollo spacecraft, the longest lunar surface stay time (the lunar module, Falcon, remained on ground for 66 hours and 54 minutes), the longest lunar surface EVA (Scott and Irwin logged 18 hours and 35 minutes each during three excursions onto the lunar surface), the longest distance traversed on lunar surface, the first use of the lunar roving vehicle, the first use of a lunar surface navigation device (mounted on Rover-1), the first subsatellite launched in lunar orbit, and the first EVA from a command module during transearth coast.

Additionally, Worden has been listed in the Guinness Book of World Records as the "Most isolated human being" during his time alone in the command module Endeavour. When the orbiting command module was at its greatest distance from Scott and Irwin in the Falcon, Worden was 2,235 miles away from any other human beings. Worden said he enjoyed his "three wonderful days in a spacecraft all by myself", including not communicating with Earth while on the far side of the Moon, because he was used to being alone as a fighter pilot.

Scott and Irwin collected approximately 171 pounds of lunar surface materials on their three expeditions onto the lunar surface and Worden logged 38 minutes in extravehicular activity outside the command module, Endeavour. In completing his three excursions to Endeavour's scientific instrument module bay, Worden retrieved film cassettes from the panoramic and mapping cameras, performing the first deep-space EVA, and reported his personal observations of the general condition of equipment housed there. Apollo 15 concluded with a Pacific splashdown and subsequent recovery by USS Okinawa. In completing his space flight, Worden logged 295 hours and 11 minutes in space.

The astronauts were allowed to choose the design for the patch but were not allowed to put on the Roman numeral for 15. They got around this technicality by adding it to the moon's surface in the background.

During 1972-1973, Worden was Senior Aerospace Scientist at the NASA Ames Research Center, and from 1973 to 1975 he was chief of the Systems Study Division at Ames. Between 1972 and 1975, he made seven guest appearances on Mister Rogers' Neighborhood.

After retirement from NASA and active duty in 1975, Worden became President of Maris Worden Aerospace, Inc., and then became staff Vice President of BG Goodrich Aerospace in Brecksville, Ohio. Worden served as chairman of the Astronaut Scholarship Foundation until 2011, providing scholarships to exceptional science and engineering students. Worden is the last of the Apollo astronauts to participate in the Kennedy Space Center's "Encounter with an Astronaut" program in which the public can attend a lecture by, ask questions of, and even dine with an astronaut.

In 2011, Worden's memoir Falling To Earth made the top 12 of the LA Times Bestseller list.

After the return of Apollo 15 to Earth, it was discovered that, without authority, the crew had taken 398 commemorative postal covers to the moon. Of these, 100 were then sold to a German stamp dealer. The profits of the sale would have been used to establish trust funds for the crew's children. Although their action was not in any way illegal, and despite the fact that NASA had turned a blind eye to similar activities on earlier flights, NASA administration decided to make an example of Scott and his crew and none of them flew in space again.

In 1982, Worden ran for the United States House of Representatives in Florida's 12th congressional district but lost the Republican primary to state senator Tom Lewis. He sold some of the postal covers to pay for debts from this unsuccessful campaign.

Worden married Pamela Vander Beek, whom he met on a blind date while a cadet, in June 1955. The couple divorced in December 1969 just before Worden was selected to fly on Apollo 15. Worden married Jill Lee Hotchkiss in July 1982. He has three children. His recreational interests include bowling, water skiing, golf and racquet ball.

In the 1998 HBO miniseries From the Earth to the Moon, Worden was played by Michael Raynor.