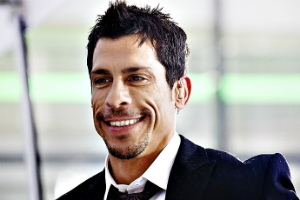 Daniel William "Danny" Wood (born May 14, 1969) is an American singer, songwriter, record producer, and occasional actor. He is also a member of the American boy band New Kids on the Block and also serves as one of the key choreographers.

Wood was born in Boston, Massachusetts to Elizabeth and Danny Wood, Sr. He was in the 10th grade when Maurice Starr offered him a place in NKOTB.

After New Kids On The Block disbanded in 1994, Wood pursued a solo music career and got into acting. His first film was Thank You, Good Night, a story about four musicians struggling to succeed in their personal and professional lives. The film was released in 2001.

He released his first solo album in July 2003, entitled Second Face. All the songs on the album were produced by Wood and his friend, Pete Masitti. In 1999, he released the album Room Full Of Smoke as D-Fuse, and in 2008 he released Coming Home. Wood operates his own record label called Damage Records. In 2009, Wood decided to release another album, this time called Coming Home 2: This Time to Joey and Heather, featuring the two singles "Just Working Out" and "Breakfast".

Wood featured in MTV's follow up to Totally Scott-Lee called Totally Boyband, and was featured in a new group with other former boyband members such as Dane Bowers. The band's name was Upper Street with a single charting at #26, but the charting did not meet the expectations, and Upper Street disbanded shortly thereafter.

In the summer of 2008, Wood had reunited with the members of New Kids On The Block, following a successful new album and worldwide concert tour.