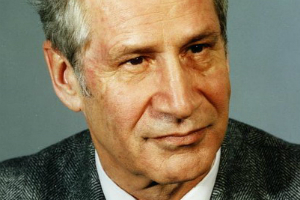 Markus Johannes "Mischa" Wolf (19 January 1923 – 9 November 2006) was head of the General Intelligence Administration (Hauptverwaltung Aufklärung), the foreign intelligence division of East Germany's Ministry for State Security (MfS, commonly known as the Stasi). He was the MfS's number two for 34 years, which spanned most of the Cold War. Many intelligence experts regard him as one of the greatest spymasters of all time.

Born in Hechingen, Province of Hohenzollern (now Baden-Württemberg), Wolf was the son of the writer and physician Friedrich Wolf and brother of film director Konrad Wolf. His father was a member of the Communist Party of Germany, and after Adolf Hitler gained power, Wolf emigrated to Moscow with his father, via Switzerland and France, because of their Communist convictions and because Wolf's father was Jewish.

During his exile, Wolf first attended the German Karl Liebknecht Schule and later a Russian school. Afterwards, he entered the Moscow Institute of Airplane Engineering (Moscow Aviation Institute), which was evacuated to Alma Ata after Germany's attack on the Soviet Union. There he was told to join the Comintern, where he among others was prepared for undercover work behind enemy lines.

After the end of the war, he was sent to Berlin with the Ulbricht Group, led by Walter Ulbricht to work as a journalist for a radio station in the Soviet Zone of occupation. He was among those journalists who observed the entire Nuremberg Trials against the principal Nazi leaders.

In 1953, at the age of 30, Wolf was among the founding members of the foreign intelligence service within the Ministry for State Security. As intelligence chief, he achieved great success in penetrating the government, political and business circles of West Germany with spies. The most notable individual in this regard was Günter Guillaume, who was close aide to West German chancellor Willy Brandt, and whose exposure as an East German agent led to Brandt's resignation in 1974.

For most of his career, Wolf was known as "the man without a face" due to his elusiveness. It was reported that Western agencies did not know what the East German spy chief looked like until 1978, when he was photographed by Säpo, Sweden's National Security Service, during a visit to Sweden. An East German defector, Werner Stiller, then identified Wolf to West German counter-intelligence as the man in the picture. A counter-claim states, however, that elements within the CIA had identified him by 1959 from photographs of attendees at the Nuremberg trials.

He retired in 1986 in order to continue the work of his late brother Konrad in writing the story of their upbringing in Moscow in the 1930s. The book Troika came out on the same day in East and West Germany. His successor as head of the East German foreign intelligence service was Werner Großmann.

Shortly before German reunification Wolf fled the country, and sought political asylum in Russia and Austria. When denied, he returned to Germany where he was arrested by German police. Wolf claimed to have refused an offer of "seven figures", a new identity and a home in California from the Central Intelligence Agency to defect to the United States.

In 1993 he was convicted of treason by the Oberlandesgericht Düsseldorf and sentenced to six years imprisonment. This was later quashed by the German supreme court, because Wolf was acting from the territory of the then-independent GDR. In 1997 he was convicted of unlawful detention, coercion, and bodily harm, and was given a suspended sentence of two years imprisonment. He was additionally sentenced to three days' imprisonment for refusing to testify against Paul Gerhard Flämig when the former West German (SPD) politician was accused in 1993 of atomic espionage. Wolf said that Flämig was not the agent that he had mentioned in his memoirs: Flämig had unwittingly been probed by intelligence agents during authorised discussions in the GDR.

Markus Wolf died in his sleep at his Berlin home on 9 November 2006.

John le Carré's fictional spymaster Karla, a Russian, who appears in Tinker, Tailor, Soldier, Spy, The Honourable Schoolboy and Smiley's People was believed by some readers to be modeled on Wolf. However, the writer has repeatedly denied this, and did so once again when interviewed on the occasion of Wolf's death.

Another le Carré character, who in fact comes even closer than Karla, is Fiedler in The Spy Who Came In From The Cold. He is depicted as a German Jew who spent World War II in exile and came back to gain a senior position in East Germany's Intelligence Service.

Wolf appears as a character in Frederick Forsyth's novella "Pride and Extreme Prejudice," in The Deceiver, when a KGB officer liaises with East German intelligence while tracking down a British agent in East Berlin.