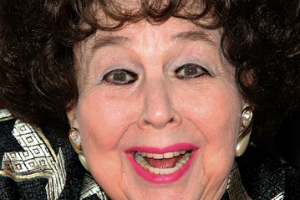 Jane Withers (born April 12, 1926) is an American actress. Beginning a prolific career as a child actress at the age of three, Withers is a Young Artist Award–Former Child Star "Lifetime Achievement" Award honoree, best known for being one of the most popular child film stars of the 1930s and early 1940s, as well as for her portrayal of "Josephine the Plumber" in a series of TV commercials for Comet cleanser in the 1960s and early 1970s.

Withers was born in Atlanta, Georgia to parents Ruth and Walter Withers who taught Bible class at the local Presbyterian church. She began her career as a child actress at the age of three, first on local radio broadcasts in Atlanta as "Dixie's Dainty Dewdrop". In the early 1930s, Withers and her mother moved to Hollywood where she worked as a child model and a bit part player in several films in 1932 and 1933.

Withers's big break came when she landed a supporting role in the 1934 Shirley Temple film Bright Eyes. Her character Joy Smythe was spoiled and obnoxious, a perfect foil to Temple's sweet personality. In a 2006 interview on TCM's Private Screenings with Robert Osborne, Withers recalled that she was hesitant to take this role because she had to be so "mean" to Shirley Temple and she thought the public would hate her for it. In the movie, she tells Temple: "There ain't any Santa Claus, because my psychoanalyst told me!" Withers received positive notices for her work, and was awarded a long-term contract with Fox.

Through the remainder of the 1930s she starred in several movies every year, including Ginger (1935), The Farmer Takes a Wife (1935) and Little Miss Nobody (1936), usually cast as a wholesome, meddlesome young girl in films less sugary than Temple's vehicles. Moviegoers flocked to see her films, and Withers became one of the top 10 box-office stars in 1937 and 1938. Her popularity was such that Fox gave her "name" co-stars: the Ritz Brothers (in Pack Up Your Troubles) and Gene Autry (in Shooting High). Withers also took a flyer in screenwriting: she wrote the original story filmed as Small Town Deb, under the pseudonym "Jerrie Walters." In 1979, Withers was honored by the Young Artist Foundation with its very first Former Child Star "Lifetime Achievement" Award recognizing her outstanding achievements within the film industry as a child actress.

Withers was the heroine of two novels, Jane Withers and the Hidden Room (1942, by Eleanor Packer) and Jane Withers and the Phantom Violin, (1943, by Roy J. Snell), published by Whitman Publishing Company, where "the heroine has the same name and appearance as the famous actress but has no connection ... it is as though the famous actress has stepped into an alternate reality in which she is an ordinary person." However, in 1944's Jane Withers and the Swamp Wizard (1944, by Kathryn Heisenfelt), "the heroine is identified as a famous actress". The stories were probably written for a young teenage audience and are reminiscent of the adventures of Nancy Drew. They are part of a series known as "Whitman Authorized Editions", sixteen books published between 1941-1947 that featured a film actress as heroine.

Withers kept working in the 1940s; she made sixteen films for Fox, Columbia, and Republic Pictures. Her "sweet sixteen" birthday party was filmed by Paramount for the Hedda Hopper's Hollywood series. Withers received excellent notices for her dramatic performance in Lewis Milestone's The North Star.

In 1947, in her early twenties, Withers retired for several years from acting, after marrying wealthy Texas oil man, William P. Moss, Jr., (they wed on September 20, 1947), and had three children by him — William, Wendy, and Randy. The marriage was not a happy one and lasted only six years until their divorce on July 20, 1955.

On October 23, 1955, she remarried, this time to Kenneth Errair, one-quarter of the harmonizing group "The Four Freshmen". They had two children, Ken and Kendall Jane. The same year, she earned a supporting role in the film classic, Giant.

In 1955, while filming the movie Giant, Withers developed a friendship with James Dean. In the DVD special features she tells the story that Dean had a favorite pink cowboy shirt he wore all the time. He never let it go the laundry for fear it would be lost like the other shirts he had. Withers convinced him to let her wash it for him. She did this often and when he left to go to the race he gave her his shirt to wash and have ready for him when he came back. James Dean died that day in the fateful fatal car wreck in California. Withers still keeps his shirt and the fond memories of him.

Withers appeared in various television series in the early 1960s, including the CBS sitcom Pete and Gladys, in the role of Wilma in the 1962 episode "Step on Me"; the CBS anthology series General Electric Theater, hosted by Ronald W. Reagan; and the CBS adventure series The Aquanauts, starring Keith Larsen and Jeremy Slate. She was cast in 1963 as Edith Swinney in the episode "How to Get Rid of Your Wife" on CBS's The Alfred Hitchcock Hour.

By the middle 1960s, she gained recognition again as "Josephine the Plumber", a character in a long-running and popular series of television commercials for Comet cleanser, and the veteran TV-ad pitchwoman's beloved character lasted into the 1970s, and even further in the 1980s when her niece, JoAnn or Jo, would show her customers a picture of her Aunt Josephine. During this time, Withers also continued to do voice-over work and occasional guest-starring appearances on television. A December 15, 2008, Advertising Age article about Flo, the Progressive Insurance TV commercial character played by Stephanie Courtney, said that Flo, "... is a weirdly sincere, post-modern Josephine the Plumber who just really wants to help. She has: The brand is flourishing."

On June 14, 1968, her husband of fourteen years, Errair, was killed in a plane crash in California. Withers lost adult son Walter Randall "Randy" Moss (from her first marriage) on January 15, 1986, just two days after his 34th birthday. Withers often claimed that a strong spiritual faith got her through many personal challenges.