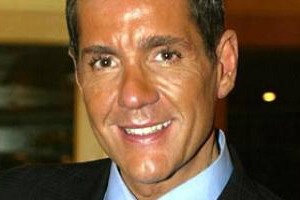 Dale Winton (born 22 May 1955) is an English radio DJ and television presenter. Dale Winton is best known for hosting the television programme Dale's Supermarket Sweep, and his association with The National Lottery branded programmes.

Winton's father, Gary, died when Winton was 13, on the day of Winton's bar mitzvah. Winton was brought up by his mother, actress Sheree Winton. Sheree was often referred to as 'the English Jayne Mansfield'. She committed suicide by drug overdose in 1976, after a lifelong battle with clinical depression.

Winton started DJ'ing in clubs in Richmond in 1972, where he met Steve Allen. The two have remained best friends since. From there he had a selection of menial jobs including selling time shares abroad. In 1982, Winton moved to London and began his entertainment career on the London club circuit, where he DJ'd at weekends. This led him to United Biscuits Industrial Radio where he did a variety of jobs, before getting his own morning show. From here he joined Radio Trent in Nottingham, where he presented a weekend show, moving to the weekday mid-morning show, before leaving in 1985, and going on to work at a number of other local radio stations.

Winton began his television career in 1987, working for Channel Four, the Lifestyle Channel and ITV. From 1993 to 2000, Winton hosted Dale's Supermarket Sweep during the Daytime TV period on ITV. In 2007, Supermarket Sweep was revived after a five and a half year absence. Winton played the camp, over-the-top, game show presenter in Danny Boyle's 1996 film of Irvine Welsh's 1993 novel Trainspotting. In 1995 and 1996, Winton presented the Saturday night game show Pets Win Prizes.

In 1997, he presented the final of The Great British Song Contest, the UK's national pre-selection for the Eurovision Song Contest, due to a tie-in with the lottery programme. Between that year and 2002, he also presented a dating show called The Other Half. In 1999, he appeared on the sitcom Gimme Gimme Gimme with Kathy Burke in the episode Do They Take Sugar?. In 2000, Dale took over from Alan Freeman to present Pick of the Pops on BBC Radio 2, and hosted the show until 30 October 2010; after that date Tony Blackburn replaced him.

In 2001, he presented Channel 5's endurance show Touch The Truck. In 2002, he released his autobiography in which he wrote about his rise to fame, his actress mother's suicide and came out about his homosexuality. In 2003 he appeared in the BBC Three mock documentary, Dale's Wedding, in which he supposedly married the UK celebrity Nell McAndrew. In 2003–4, he hosted two series of Stars Reunited where the casts of popular UK TV series were reunited after many years.

Between 2004 and 2006, he presented three series of the celebrity weight loss "boot camp" programme, Celebrity Fit Club on ITV. In April 2006, he guest presented BBC Two's pop quiz Never Mind the Buzzcocks. In August 2006, he was chosen to host the pilot of Endemol's new show, Show Me What You've Got; however, the show did not receive a full series.

Winton continued to host the BBC One primetime Saturday night game show In It To Win It.

In February 2009, he signed a new contract to host at least two further series of the show, plus two series of a new Lotto tie-in. In February 2008, he completed a pilot show for BBC One called You've Got The Answer, a money game show that surprises the public using hidden cameras. Winton presented BBC One's Saturday night entertainment programme Hole In The Wall, based on the Japanese original, where contestants in skin-tight Lycra costumes contort themselves to fit through oddly-shaped holes in a moving wall.

Winton began appearing in television advertisements for cashmygold.co.uk. Winton appeared on Matt Lucas and David Walliams' 2010 comedy series Come Fly With Me. He appeared in the last episode, playing himself. Winton has also sat in for Steve Wright on BBC Radio 2. In 2012, he hosted one-off ITV gameshow Dale's Great Getaway. In 2013, he continued In It To Win It.

In February 2013, Winton expressed an interest in managing the remote Scottish island of Inchcolm.