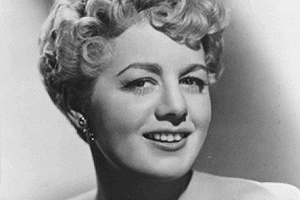 American actress who received Oscars for "The Diary Of Anne Frank," 1959 and "A Patch Of Blue," 1965. She was first nominated for an Oscar for the 1951 film "A Place In the Sun." Before films, she made her Broadway debut in 1941 with a film debut two years later, starring in "A Double Life." In addition, she has done a lot of TV, including playing a grandmother on the TV sitcom, "Roseanne."

She has been married and divorced three times. Her second husband, 1952-1954, was Vittorio Gassman and her third husband, 1957-1960, was Tony Franciosa. However, in her autobiography, "Shelley, Also Known As Shirley," 1980, she boasts of affairs with Burt Lancaster, Errol Flynn, William Holden and others.

Although she was hugely obese for a while, she was eventually able to lose some of the excess weight. Her weight was not the worst of her problems, however. Since 1995, at age 72, Winters has been in the Betty Ford Clinic, Hazelton, and St. John's Medical Center in Santa Monica, CA trying to kick painkillers and tranquilizers.