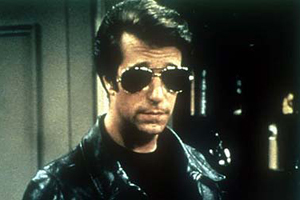 Winkler is best known for his role as Fonzie in the 1970s American sitcom Happy Days. "The Fonz", a leather-clad greaser and auto mechanic, started out as a minor character at the show's beginning, but had achieved top billing by the time the show ended. He currently stars as Sy Mittleman on Childrens Hospital.

Winkler attended the McBurney School, received his bachelor's degree from Emerson College in 1967, and earned his MFA from the Yale School of Drama in 1970. In 1978, Emerson awarded Winkler an honorary doctorate of humane letters. Winkler has also received an honorary Doctor of Humane Letters from Austin College.

Winkler started acting by appearing in a number of television commercials. He also appeared in episodes of The Mary Tyler Moore Show and The Bob Newhart Show. In October 1973, he was cast for the role of Arthur Herbert Fonzarelli, nicknamed "The Fonz" or "Fonzie", in the long-running 1970s television series Happy Days. The show was first aired in January 1974.

During his decade on Happy Days, Winkler also starred in a number of movies, including The Lords of Flatbush (1974), playing a troubled Vietnam veteran in Heroes (1977), The One and Only (1978), An American Christmas Carol (TV movie, 1979) and a morgue attendant in Night Shift (1982), which was directed by Happy Days co-star Ron Howard. Winkler was also one of the hosts of the 1979 Music for UNICEF Concert.

For Happy Days, director/producer Garry Marshall originally had in mind a completely opposite physical presence. Marshall sought to cast a hunky, blonde, Italian model-type male in the role of Fonzie, intended as a stupid foil to the real star, Ron Howard. However, when Winkler, a Yale MFA student, interpreted the role in auditions, Marshall immediately snapped him up. According to Winkler, "The Fonz was everybody I wasn't. He was everybody I wanted to be."

Winkler's character, though remaining very much a rough-hewn outsider, gradually became the focus of the show as time passed (in particular after the departure of Ron Howard). Initially, ABC executives did not want to see the Fonz wearing leather, thinking the character would appear to be a criminal. The first 13 episodes show Winkler wearing two different kinds of windbreaker jackets, one of which was green. As Winkler said in a TV Land interview, "It's hard to look cool in a green windbreaker". Marshall argued with the executives about the jacket. In the end, a compromise was made. Winkler could only wear the leather jacket in scenes with his motorcycle, and from that point on, the Fonz was never without his motorcycle until season 2.

After Happy Days, Winkler concentrated on producing and directing. Within months, he had opened Winkler-Rich Productions. He produced several television shows including MacGyver, So Weird and Mr. Sunshine, Sightings, and the game shows Wintuition and Hollywood Squares (the latter from 2002–2004; occasionally serving as a sub-announcer). He also directed several movies including the Billy Crystal movie Memories of Me (1988) and Cop and a Half (1993) with Burt Reynolds.

As the 1990s began, Winkler returned to acting. In 1991 he starred in the controversial TV-movie Absolute Strangers, as a husband forced to make a decision regarding his comatose wife and his unborn baby. In 1994 he returned to TV with the short-lived comedy series Monty on Fox. Also in 1994, he co-starred with Katharine Hepburn in the holiday TV movie One Christmas. He played an uncredited role as a high school principal in the 1996 movie Scream (1996). In 1998, Adam Sandler asked Winkler to play a college football coach, a supporting role in The Waterboy (1998). He would later appear in three other Sandler films, Little Nicky (2000) where he plays himself and is covered in bees, Click (2006, as the main character's father), and You Don't Mess with the Zohan (2008), again playing himself. He also played small roles in movies such as Down to You (2000), Holes (2003), and I Could Never Be Your Woman (2007).

Winkler had a recurring role as incompetent lawyer Barry Zuckerkorn in the Fox Television comedy Arrested Development. In one episode, his character hopped over a confined shark lying on a pier, a reference to his role in the origin of the phrase, from a two-part episode of Happy Days, "jumping the shark". After that episode, Winkler, in interviews, stated that he was the only person to have "jumped the shark" twice.

When Winkler moved to CBS for one season to star in 2005–06's Out of Practice, his role as the Bluth family lawyer on Arrested Development was taken over by Happy Days co-star Scott Baio in the fall of 2005, shortly before the acclaimed but Nielsen-challenged show ceased production.

Winkler has guest-starred on television series such as Numb3rs, The Bob Newhart Show (as Miles Lascoe, a parolee just out of jail. He was in jail for armed robbery, twice.), South Park, The Practice, The Simpsons (playing a member of a biker gang. In one scene, he calls Marge "Mrs. S", a reference to Fonzie calling "Happy Days" matriarch Marion Cunningham "Mrs. C"), Law & Order: Special Victims Unit, Third Watch, Arrested Development, Crossing Jordan, Family Guy, King of the Hill and Kick Buttowski: Suburban Daredevil.

The Weezer video for 1994's "Buddy Holly" edited period footage of Henry Winkler as the Fonz, as well as a double shot from behind to create the illusion that Fonzie and other characters were watching Weezer as they performed in Arnold's restaurant. His most recent appearances were on KTTV's Good Day L.A.. Once, while substituting for Steve Edwards, Winkler reunited with fellow Happy Days cast member Marion Ross. Winkler made a cameo appearance in the band Say Anything's video for "Wow, I Can Get Sexual Too".

A close friend of actor John Ritter, the two led a Broadway ensemble cast in Neil Simon's The Dinner Party in 2000. Winkler was reunited as a guest star on Ritter's sitcom 8 Simple Rules (for Dating my Teenage Daughter) in 2003 by Ritter's request. On September 11, Ritter became ill during filming, and unexpectedly died. A stunned, grief-stricken Winkler was interviewed by Mary Hart of Entertainment Tonight and various other entertainment news sources.

In 2008, he appeared in two Christmas movies, in the Hallmark Channel movie The Most Wonderful Time of the Year as a retired cop who plays matchmaker between his niece and a drifter he befriends, and in Merry Christmas, Drake & Josh as the judge who orders Drake and Josh to give a young girl "the best Christmas ever" or be sent to jail. In 2009, Winkler provided the voice of Willard Deutschebog, a suicidal German teacher, in the Fox comedy series, Sit Down, Shut Up.

Since 2003, Winkler has collaborated with Lin Oliver on a series of children's books about a 4th grade boy, Hank Zipzer, who is dyslexic. Winkler also has the learning disability, which was not diagnosed until he was 31 and his stepson Jed was tested; the dyslexia was an unhappy part of his childhood. Winkler has published 17 books about his hero Zipzer, the "world's greatest underachiever".

In July 2008, Winkler joined First News on their annual Reading Tour of schools where he read excerpts from his Hank Zipzer books. This has since become an annual tour. In 2011 he donated books to Holy Rosary School PA . The school was flooded out by Tropical Storm Lee.

Winkler appeared in his first pantomime at the New Wimbledon Theatre, London in 2006, playing Captain Hook in Peter Pan, replacing David Hasselhoff who pulled out when he was offered a TV role by Simon Cowell. He reprised the role in Woking, England for Christmas 2007. For the 2008/2009 season he played Captain Hook at the Milton Keynes Theatre and donned the hook once again for the 2009/2010 panto season at the Liverpool Empire.

On June 2, 2010, it was announced that Winkler would become the television spokesman for One Reverse Mortgage, a reverse mortgage lender.

In October 2008, Winkler appeared in a video on funnyordie.com with Ron Howard, reprising their roles as Fonzie and Richie Cunningham, encouraging people to vote for Barack Obama. The video entitled "Ron Howard’s Call to Action" also featured Andy Griffith.

As of June 2010, Winkler is appearing on the American show Royal Pains as the father of the two main characters.

In late September 2010, Winkler was the voice of Professor Nathaniel Zib in the Lego Hero Factory mini-series, Rise of the Rookies.

On May 31, 2011, Winkler's book, I've Never Met an Idiot on the River, was published. It is a collection of his photographs and reflections drawn from his love of fly fishing and life with his family.

In 2011, Winkler guest starred as Ambush Bug in the series finale of Batman: The Brave and the Bold.

In August 2012, Winkler announced on Twitter that he would be returning to the fourth season of Arrested Development.

In the 2013 Broadway season, Winkler, Cheyenne Jackson, Alicia Silverstone, and Ari Graynor are set to star in the David West Read play The Performers opening Nov 14, 2012 at The Longacre Theatre.

Winkler appeared in the film Here Comes the Boom (released October 12, 2012), as the music teacher at Wilkinson High School.

He also appeared in MGMT's music video for Your Life is a Lie and made a special appearance with the band at FYF Fest 2013 where he played an over-sized cowbell.

Winkler has been married to Stacey Furstman Weitzman since May 5, 1978; they have two children, Zoe Emily (b. 1980) and Max Daniel (b. August 18, 1983), and a stepson, Jed, from Stacey's previous marriage with Howard Weitzman. He is the godfather of Bryce Dallas Howard, daughter of Happy Days co-star Ron Howard. Henry was the 9th King of the Bacchus, Mardi Gras, Parade in New Orleans in 1977; the theme was "Happily Ever After". Winkler's relationship with his parents (now deceased) was strained, due at least partially to their attitude towards his dyslexia. He stated his father referred to him as "dumb dog" and often punished him for his difficulties in school.