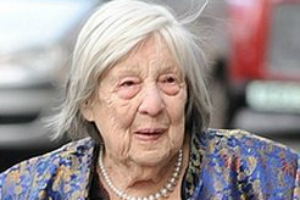 Anna Eva Lydia Catherine Wing, MBE (30 October 1914 – 7 July 2013) was an English actress who had a long career in television and theatre, but was best known for playing Lou Beale, the family matriarch of the Beale and Fowler family in EastEnders.

Wing was born in Hackney, London, and started out as an artist's model and later, during the Second World War, worked in East End hospitals. At age 30, she married the actor Peter Davey, by whom she had a son, actor-director Mark Wing-Davey, but the marriage ended in divorce after three years. Her seven years as the lover of Philip O'Connor, a surrealist writer and contemporary of Stephen Spender and Laurie Lee, saw her spend some time as a nursery teacher in West London. With her new partner she had a second son, Jon O'Connor.

Wing is best known for portraying the Beale and Fowler family matriarch Lou Beale on EastEnders from the show's inception in February 1985, until the character was killed off in July 1988. She quit her role in the hit show as she was unhappy with the direction in which it was going, but later reflected that it may not have been the right decision.

An earlier soap appearance of hers was in Market in Honey Lane for ATV in the late 1960s. She also had a role in the Doctor Who serial "Kinda" in 1982. Other television credits include roles in Dixon of Dock Green, Z-Cars, Play for Today, On Giant's Shoulders and The Sweeney.

After leaving EastEnders, Wing continued to work on stage, playing the medium, Madame Arcati, in Noël Coward's comedy Blithe Spirit. She also had numerous television roles, including parts in Casualty, Doctors, French and Saunders, The Bill, as well as adding her vocal talents to the animated series Fungus the Bogeyman. Her film credits included The Calcium Kid with Orlando Bloom and Tooth (in which she played an ancient fairy), both in 2004.

In May 2005 she attended the British Soap Awards, where she presented June Brown with a lifetime achievement award for Brown's portrayal of Dot Branning in EastEnders. In 2005, Wing formed part of the cast of the short film Ex Memoria, directed by Josh Appignanesi and produced by Oscar-winning producer Mia Bays. The short film tells of a woman's struggle with Alzheimer's Disease. Ex Memoria was nominated for a British Independent Film Award for Best Short in 2006. She played Grandma in the 2007 film Son of Rambow.

In 2009, aged 94, she worked on a short film, Numbers Up, from Guildhall Pictures. The same year Wing was appointed Member of the Order of the British Empire (MBE) in the 2009 Birthday Honours for her services to drama and charity.

Wing attended the funeral of her EastEnders onscreen daughter Wendy Richard on 9 March 2009. She was a member of the Religious Society of Friends, the Quakers, and supported the Campaign for Nuclear Disarmament. She published several books, including a biography of Gummo Marx.