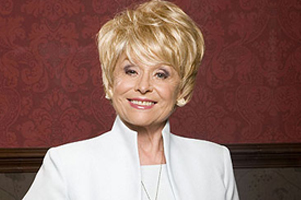 Barbara Ann Windsor, MBE (born Barbara Ann Deeks on 6 August 1937) is an English actress. Her best known roles are in the Carry On films and as Peggy Mitchell in BBC soap opera EastEnders, she is now considered by many something as a national institution.

Born in Shoreditch, London in 1937, Windsor was the only child of a costermonger and dressmaker, John and Rose Deeks. She passed the 11 plus exam with high marks, and her mother paid for her to have elocution lessons. She trained at the Aida Foster School in Golders Green, making her stage debut at 13 and her West End debut in 1952 in the chorus of the musical Love From Judy.

Her first film role was in The Belles of St Trinian's in 1954. She joined Joan Littlewood's Theatre Workshop at the Theatre Royal, Stratford East, coming to prominence in their stage production Fings Ain't Wot They Used to Be and Littlewood's film Sparrows Can't Sing in 1963, achieving a BAFTA nomination for Best British Film Actress. She also appeared in the 1964 film comedy Crooks in Cloisters and in the sitcoms The Rag Trade and Wild, Wild Women.

However, Windsor came to real prominence with her portrayals of a 'good time girl' in nine Carry On films – beginning with Carry On Spying and ending with Carry On Dick – and several TV and compilation specials between 1964 and 1977.

Her most famous scene was in Carry On Camping during which she was doing outdoor aerobic exercises and her bikini top flew off.

From 1973 to 1975 she appeared with several of the Carry On team in the West End revue Carry On London!. During this time, she had a well-publicised affair with her co-star, Sid James.

However, she was identified with the Carry On films for many years and this restricted the roles she was allowed to play later.

She also starred on Broadway in the Theatre Workshop's Oh! What a Lovely War and received a 1965 Tony Award nomination for Best Featured Actress in a Musical. She also appeared in Lionel Bart's musical flop Twang! (directed by Joan Littlewood) and in the musical Come Spy with Me with Danny La Rue.

In 1970 she landed the role of music hall legend Marie Lloyd in the musical-biopic Sing A Rude Song. In 1972 she appeared in the West End in Tony Richardson's The Threepenny Opera with his then wife, Vanessa Redgrave. In 1975 toured the UK, New Zealand and South Africa in her own show, Carry On Barbara!, and followed this with the role of Maria in Twelfth Night at the Chichester Festival Theatre.

In 1981 she played sex-mad landlady Kath in Joe Orton's black comedy Entertaining Mr Sloane at the Lyric Hammersmith, directed by her friend, Kenneth Williams. She reprised the role for a national tour in 1993.

In 1994, Windsor's fortunes picked up when she took over the role of Queen Vic landlady and mother of the Mitchell boys, Peggy Mitchell, in the BBC soap EastEnders. For this role, she received the Best Actress award at the British Soap Awards in 1999. She appeared briefly in the 2006 Doctor Who episode "Army of Ghosts" as Peggy Mitchell in a fictional episode of EastEnders.

In 1999 she made her record debut with fellow EastEnders cast member Mike Reid with The More I See You. The year 2000 was one of accolades. She was made an MBE in the Millennium Honours List, was inducted into the first BBC Hall of Fame and had a waxwork of her unveiled at Madame Tussauds. She also published her autobiography, All of Me.

After a debilitating case of the Epstein-Barr virus forced a two-year absence from EastEnders from 2003 to 2005, with just a return for two episodes in 2004, she rejoined the cast in the summer of 2005 and signed a one-year contract.

Windsor examined her family tree in the first episode of the third series of the documentary series Who Do You Think You Are?, which aired on 6 September 2006, in which she traced her family tree back 11 generations to John Golding, the great-great-grandfather of the painter John Constable, making him Windsor's fourth cousin six times removed.

As well as her affair with Sid James, she had liaisons with footballer George Best and singer Maurice Gibb. She was also romantically linked to the gangster Reggie Kray in the 1960s. Her present husband Scott is 25 years her junior.

In her autobiography, All of Me, Windsor talks about her five abortions, the first three of which took place before the age of 21, the last when she was 42. She has said that she never wanted children as a result of her own father rejecting her.

She was a real-life landlady when she ran a pub at Winchmore Hill, Buckinghamshire with her second husband, Stephen Hollings.

Barbara Windsor was the recipient of the inaugural Rear of the Year title in 1976.
She was the subject of This Is Your Life in 1992.