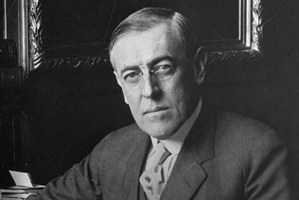 American politician who served as the 28th President of the United States from 1913-1921. He was deeply involved in the post-war Paris Peace Conference when he collapsed in September 1919. With the aid of his wife, he was able to conduct business from his bedside until his retirement in 1921.

The son of a Presbyterian minister, he studied at Princeton and Johns Hopkins, gaining his Ph.D. with the first of his major books on American government, "Congressional Government," 1885. After teaching at Bryn Mawr and Wesleyan, 1885-90, he moved to Princeton where he became president in 1902 and where his reforms had a wide impact on American university education. In 1910, Wilson entered politics as a Democrat and was elected governor of New Jersey, 1911-13; his liberal reforms brought him national attention and the Democratic presidential nomination in 1912 (although only on the 46th ballot).

With the Republicans split between Taft and Theodore Roosevelt, Wilson won by a landslide. He effectively continued a reformist program he called the "New Freedom." His initiatives included lowering tariffs, a graduated income tax, the Federal Reserve Act, the Federal Trade Commission, the Clayton Antitrust Act, the eight-hour workday, and landmark laws against child labor. On the international front he was less successful, especially in his attempts to intervene in Mexican politics. He won reelection in 1916 with a pledge to keep America out of the European war, but found the U.S. inexorably drawn in. Declaring war on Germany in April 1917, he proposed a peace in the form of the "Fourteen Points," which brought Germany to the bargaining table in late 1918.

Much of the world now hailed him as virtually a savior, but at the Versailles Peace Conference he was confronted by the compromises of Realpolitik. On his return to America his dream of a League of Nations - largely due to his refusal to compromise - went down to defeat in Congress as his health collapsed. He spent his last months in office incapacitated while Edith Galt Wilson served as his intermediary for many decisions and in 1921, retired to seclusion. Undeniably one of the most intelligent and high-minded presidents the U.S. has had, he was also rigid in certain ways and unresolved in others so that when it came to the climax of his life's work - America's entry into a League of Nations - he was unable to make the appropriate moves. He died on 2/03/1924, Washington, D.C.