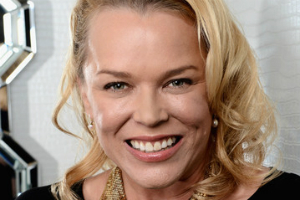 Wilson was born in Brisbane, Australia. She completed her secondary education at Stella Maris College, Manly. Her first major role was in the television mini-series Brides of Christ and she remains best known for playing Darcy Hudson in A Country Practice. She was subsequently seen in series such as Heartbreak High and All Saints. Wilson also co-hosted the music program "Video Smash Hits" on the Seven Network.

In 1995, together with then boyfriend Jeremy Sims, Wilson formed the theatrical production company "Pork Chop Productions".

She moved to the United States in 1998 to escape press attention over her affair with Michael Hutchence, where she undertook a three months acting scholarship assisted by the Winston Churchill Fellowship, which she had won before Michael Hutchence's death in November 1997.

Wilson appeared nude on the cover of the May 1999 edition of Australian Playboy, after she was no longer acting regularly in TV series. She previously appeared semi-naked in Black+White magazine.

As of 2008, Kym Wilson was a board member of Australians In Film, based in Los Angeles. Wilson married Sean O'Byrne on 9 October 2009.