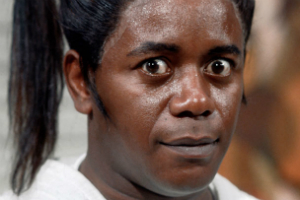 Born Clerow Wilson, Jr. in Jersey City, New Jersey, he was one of 24 children (18 of whom lived into adulthood) born to Clerow, Sr. and Cornelia Wilson. Clerow, Sr. worked as a handyman and, because of the Great Depression, was often out of work. When Wilson was seven years old, his mother abandoned the family. His father was unable to care for the children alone and he placed many of them in foster homes. After bouncing from foster homes to reform school, 16-year-old Wilson lied about his age and joined the United States Air Force. His outgoing personality and funny stories made him popular; he was even asked to tour military bases to cheer up other servicemen. Claiming that he was always "flipped out", Wilson's barracks mates gave him his famous nickname. Discharged in 1954, Wilson started working as a bellhop in San Francisco's Manor Plaza Hotel.

At the Plaza's nightclub, Wilson found extra work playing a drunken patron in between regularly scheduled acts. His inebriated character proved popular and Wilson began performing it in clubs throughout California. He managed to get jobs at various comedy clubs using his nickname, Flip. At first Wilson would simply ad-lib onstage, but eventually he added written material and his act became more sophisticated.

During the 1960s, Wilson became a regular at the Apollo Theater in Harlem and was a favourite guest on The Tonight Show, Laugh-In, and The Ed Sullivan Show. In 1970, Wilson won a Grammy Award for his comedy album The Devil Made Me Buy This Dress.

A routine titled "Columbus," from the album Cowboys and Colored People, brought Wilson to Hollywood industry attention and led to the development of his own television show. In this bit, Wilson retells the story of Christopher Columbus from an anachronistic and urbanized viewpoint, in which Columbus convinces the Spanish monarchs to fund his voyage by noting that discovering America means that he can also discover Ray Charles. Hearing this, Queen "Isabel Johnson", whose voice is an early version of Wilson's eventual "Geraldine" character, says that "Chris" can have "all the money you want, honey — You go find Ray Charles!" When Columbus departs from the dock, an inebriated Isabella is there, testifying to one and all that "Chris gonna find Ray Charles!"

In 1970 Wilson's variety series, The Flip Wilson Show, debuted on NBC. He played host to many African-American entertainers, including The Jackson Five, and The Temptations and performed in comedy sketches. He greeted all his guests with the "Flip Wilson Handshake,": four hand slaps, two elbow bumps finishing with two hip-bumps. George Carlin was one of the show's writers, and Carlin also made frequent appearances on the show, as the two would expand Carlin's news-weather-sports satire. Wilson's characters included Reverend Leroy, materialistic pastor of the "Church of What’s Happening Now", and his most popular character, Geraldine Jones, always referring to a boyfriend named "Killer" and whose line "The devil made me do it" became a national catchphrase. "Killer" was either in prison or at the pool hall so he was not seen on the show.

After the end of The Flip Wilson Show, Wilson made guest appearances on numerous TV comedies and variety shows, such as Here's Lucy starring Lucille Ball and The Dean Martin Show among others. Ed Sullivan invited Wilson to perform several times on his popular Sunday night show, and Wilson later singled out Sullivan as providing his biggest career boost. Wilson acted in TV and theatrical movies including Uptown Saturday Night and The Fish that Saved Pittsburgh. In 1976, he appeared as the Fox in a television musical adaptation of Pinocchio, starring Sandy Duncan in the title role and Danny Kaye as Mister Geppetto, with songs by Laugh-In composer Billy Barnes.

In 1984, he hosted the remake of People Are Funny. From 1985 to 1986, Wilson played the lead role in the CBS sitcom Charlie & Co. Wilson's last role was a cameo appearance in the sitcom Living Single in November 1993.

Wilson was married twice; he married first wife, Lovenia Wilson, in 1957: they divorced in 1967. Then, in 1979, he married Tuanchai MacKenzie. They divorced in 1984. After winning custody of his children in 1979, Wilson performed less in order to spend time with his family. Before becoming ill, he was an active lighter-than-air pilot.

The phrase "What you see is what you get" was often used by Wilson's Geraldine character and inspired researchers at PARC and elsewhere to create the acronym WYSIWYG.