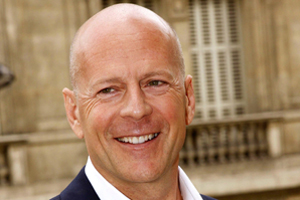 Bruce Willis (born Walter Bruce Willison on March 19, 1955) is a two-time Emmy Award-winning, Golden Globe-winning American actor and singer. He came to fame in the late 1980s and has since retained a career as both a Hollywood leading man and a supporting actor, in particular for his role in the Die Hard series.

Willis first found fame with his starring role in the hit TV series Moonlighting (1985–89) establishing himself as a comedic actor. However, it was his then-unexpected turn in the Die Hard series that catapulted him to fame. He also was successful in his role as the voice of little Mikey in the Look Who's Talking series.

In the late-1980s, Willis enjoyed moderate success as a recording artist, recording an album of pop-blues entitled The Return of Bruno, which included the hit single "Respect Yourself", promoted by a Spinal Tap-like rockumentary parody featuring scenes of him performing at famous events including Woodstock. Follow-up recordings were not as successful, though Willis does return to the recording studio from time to time.

In the early 1990s, Willis' career suffered a moderate slump starring in flops such as The Bonfire of the Vanities and Hudson Hawk, among others. However, in 1994 he had a supporting role in Quentin Tarantino's acclaimed Pulp Fiction, which gave a new boost to his career. In 1996, he produced the cartoon Bruno the Kid which featured a CGI representation of himself. He went on to play the lead roles in Twelve Monkeys and The Fifth Element. However, by the end of the '90s, his career had fallen into another slump with critically panned films like The Jackal, Mercury Rising and Breakfast of Champions, saved only by the success of the Michael Bay-directed ARmageddon which was the highest grossing film of 1998 in the US.

In 1999, Willis then went on to the starring role in M. Night Shyamalan's film, The Sixth Sense. The film was both a commercial and critical success and launched Willis' career to a new level of stardom. He once had to appear in the hit sitcom Friends without pay, because he lost a bet to Matthew Perry, his co-star in The Whole Nine Yards and its sequel The Whole Ten Yards. He won a 2000 Emmy for Outstanding Guest Actor in a Comedy Series for his work on Friends (in which he played the father of Ross Geller's much-younger girlfriend). He was also nominated for a 2001 American Comedy Award (in the Funniest Male Guest Appearance in a TV Series category) for his work on Friends. Willis was originally cast as Terry Benedict in Ocean's Eleven (2001) but dropped out. In Ocean's Twelve (2003), he makes a cameo appearance as himself. He recently appeared in the Planet Terror half of Grindhouse as the villain, a mutant soldier. This marks Willis' second collaboration with director Robert Rodriguez, following Sin City.

Willis also appeared on Japanese Subaru Legacy television commercials, optimising the car for sale, with the backing music of Jade from Sweetbox, "Addicted" and "Hate Without Frontiers". Tying in with this, Subaru did a limited run of Legacys, badged "Subaru Legacy Touring Bruce", in honor of Willis.

Willis has appeared in four movies with Samuel L. Jackson (Unbreakable, Pulp Fiction, Die Hard with a Vengeance, and National Lampoon's Loaded Weapon 1). He is also currently working on the film Black Water Transit alongside Jackson due in 2007. He has finished filming the thriller Perfect Stranger, opposite Halle Berry, and is now filming his return to the role of John McClane in Live Free or Die Hard which is being directed by Len Wiseman.