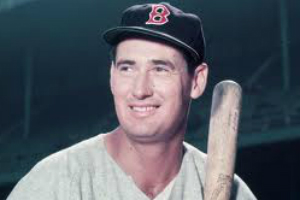 American baseball player who played professional baseball from 1937, but had his career interrupted by five years of combat as a Marine pilot. Returning to the Boston Red Sox, he was voted the Most Valuable Player in 1946 and 1949. Two decades later, in 1969, he was voted Manager of the Year while with the Washington Senators. Later, he went on to become a fishing and game expert with Sears Roebuck.

Suffering from congestive heart failure and several strokes, Williams was fitted with a pacemaker 10/29/2000, Hernando, FL. On 1/15/2001, he had open heart surgery in a New York Hospital and was reported to be doing well by his son, John Henry Williams. He died on 7/05/2002, Crystal River, FL, leaving a legendary 19-year career with the Boston Red Sox for his Hall of Fame inclusion.

After his death, Williams' body was sent to an Arizona cryonics warehouse. Two of his children, John Henry and Claudia have claimed that they signed a handwritten pact with their father in 2000 agreeing that their bodies would be frozen But family member are divided about this decision and his eldest daughter, Bobby-Jo Ferrell, spent about $50,000 from her retirement savings in the following 16 weeks in a court battle to have her dad's remains cremated. The case had built up bills of some $60,000 of which fund-raising has only brought in a fraction and it may fall down to dismissal from legal bills. Ferrell withdrew her claim.

Ted's son, John Henry Williams, died of leukemia late in the evening of March 6, 2004 in Los Angeles. He had been diagnosed with the acute myelogenous leukemia in October 2003. John Henry’s body was taken to the Arizona cryonics lab to be frozen along with his father’s. His step-sister, Bobby-Jo Ferrell, has renewed attempts to free her father’s body from its frozen state and cremate it, as, she claims, he wanted.