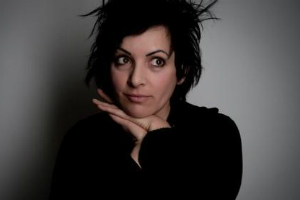 Jane Marie Genevieve Wiedlin (born May 20, 1958) is an American musician, singer-songwriter, and actress. She is best known as the rhythm guitarist of the all-female New Wave band The Go-Go's.

Jane Wiedlin was born in Oconomowoc, Waukesha County, Wisconsin. Her father, an oral surgeon, was born in Chicago, Illinois, and her mother was from Oconomowoc; they met at Marquette University in Milwaukee. Wiedlin spent her early childhood growing up in West Allis, a suburb of Milwaukee, Wisconsin. She is one of five children, with a sister and three brothers.

When Jane was six, her father took a job with the United States Department of Veterans Affairs at a VA Hospital in Los Angeles, California and her family followed in tow. Soon after arriving in California, Wiedlin's mother cut Jane's waist-long hair to her signature pixie cut hairstyle, due to Wiedlin's becoming an active swimmer now that she lived in a warmer climate. Wiedlin loved watching Star Trek with her family when it first aired on television and is a lifelong fan to this day.

As a child, Jane liked to listen to 1960s pop music, especially songs by The Beatles and The Monkees. By the time she was a teenager, Wiedlin was a fan of Sparks. Years later, she would record "Cool Places" with them, as well as turn down a marriage proposal from Russell Mael, the band's co-founder. Jane Wiedlin stated, "I remember my childhood as extremely idyllic." Wiedlin also mentioned her teenage adolescence with angst and hope by saying, "I would definitely be a less-depressed teenager. I thought life was completely pointless when I was in high school, but just a few short years later I was having the adventure of a lifetime in a successful rock band!" Jane Wiedlin attended William Howard Taft High School in Los Angeles from 1972 until 1976.

As Jane Wiedlin describes it, she was present "pretty much from the beginning" of the Los Angeles punk scene. While attending college in the Los Angeles area, for fashion design, Wiedlin worked at a fashion design house where she created song lyrics by scribbling down ideas on the clothing patterns. "Jane Drano," as she came to be known, would later design punk-style clothing that she sold at Granny Takes a Trip, a store on Sunset Boulevard. She became part of the scene that spawned bands like X, The Germs and The Weirdos. She and Belinda Carlisle formed The Go-Go's as a punk band in 1978, with Margot Olaverra on bass, and Elissa Bello on drums. In 1981, Wiedlin and Terry Hall of the Fun Boy Three and The Specials co-wrote "Our Lips Are Sealed." The song peaked on the Billboard charts at No. 20 and remained on the charts until 1982. Hall also recorded the song with his band and the song was quite popular, hitting No. 7 in the UK.

The Go-Go's pop punk sound did not emerge until after Charlotte Caffey joined on lead guitar and keyboards, and Gina Schock replaced Bello on drums. After a 1980 tour of England, the band added Kathy Valentine on bass. They signed with IRS Records in April 1981. Wiedlin remained part of The Go-Go's until October 1984, when she left to pursue a solo career. "Rush Hour" (1988) was her most successful single – having done well in both the American and British charts. The song was taken from her second album, Fur.

After a series of reunions during the 1990s, Wiedlin, Carlisle, Caffey, Schock, and Valentine re-formed the band again in 2000 to record God Bless the Go-Go's, their first studio album in seventeen years. The album, originally titled Vision of Nowness, had a title and concept based on an idea from Wiedlin.

In 2010, the Go-Go's announced their Happily Ever After Farewell Tour. Although scheduled to begin in July, the tour was cancelled due to ACL tears Wiedlin suffered in both knees after a fall she took while on a nighttime hike. She recovered and the band rescheduled the tour for 2011, no longer billing it as a farewell tour and changing the name to "Ladies Gone Wild."

Her early acting credits include a one-line role in Star Trek IV: The Voyage Home (she is credited as Alien Communication Officer, but the script had her as Officer Trillya), Joan of Arc in Bill & Ted's Excellent Adventure, an ill-fated singing telegram girl in Clue, and the White Fairy in Golan-Globus's Sleeping Beauty.

In a St. Petersburg Times online interview, Jane said this about her acting career in the 1980s: "It turned out to be much harder than it looks, and as much as I enjoyed those experiences, I don't think I'm very good at it."

In 2000, she sang in the choir on the Frasier episode "They're Playing Our Song". In 2001, she had a regular role in MTV's Spyder Games, playing the "ex-rock chick who runs the local coffee house" where everyone hangs out.

In 2003, she guest-starred as Hope Rodgers in an episode of As Told By Ginger.

Wiedlin has also provided voices for several characters in television and film. Her voice acting credits include one of Bruce Wayne's girlfriends in an episode of The New Batman Adventures, Gwen on Mission Hill, and Dusk, a recurring character in the Scooby-Doo franchise. In 2009, Wiedlin provided the voice of the evil Baby Oopsie Daisy in the horror film, Demonic Toys 2.

Wiedlin contributed quotes to Girls Against Girls by author Bonnie Burton. In April 2009, Wiedlin was shot as Bettie Page by photographer Austin Young for the "Heaven Bound" art show.

Her latest project is a comic book entitled Lady Robotika which she co-created with artist Bill Morrison. The series concerns the adventures of a woman being abducted by aliens and turned into a cyborg superheroine. To promote the comic series and her related projects, Jane appeared at the March 2011 WonderCon where she greeted fans, posed for pictures, and signed autographs.

Wiedlin is a long-time animal rights activist, and has worked with PETA since at least 1989 when she performed as part of a "Rock Against Fur" concert in New York City. She is a close friend of PETA's Dan Mathews.

Wiedlin had what she called a "short but dramatic romance" with Terry Hall of The Specials during their 1980 tour in England; Hall later sent her some lyrics prompted by their relationship, inspiring Wiedlin to write "Our Lips Are Sealed", a song on which Hall has co-writer credits.

Wiedlin has been married twice; once to Ged Malone (from 1987 to 1999) and once to David Trotter (from 2004 to 2005). Her first marriage was the subject of her 2000 song "The Good Wife." Her current domestic partner is musician Travis Kasperbauer, whom she met at a Wisconsin music festival. She has no children.

Wiedlin is an ordained minister of the Universal Life Church, a mail-order religious organization that offers anyone semi-immediate ordination as a ULC minister, free of charge. Wiedlin identifies herself as "Reverend Sister Go-Go", serving primarily in the capacity of officiating at weddings.