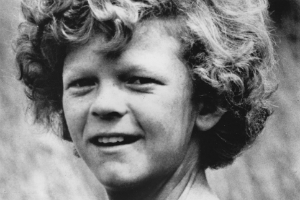 Johnny Whitaker (born December 13, 1959) is an American actor and singer notable for several performances for film and television during his childhood. The naturally redheaded Whitaker is best known for his role as Brian Keith's 6-year-old nephew, Jody Davis, on Family Affair from 1966–1971, originated the role of Scotty Baldwin on General Hospital in 1965, played the lead in Hallmark's 1969 The Littlest Angel, and portrayed the title character in the 1973 musical version of Tom Sawyer. Two of his siblings, Billy and Dora, provided the voices of the rabbits Skippy and Tagalong for Disney's animated film Robin Hood in that same year.

Whitaker was born as John Orson Whitaker, Jr. in Van Nuys, California, the fifth of eight children to Thelma and John O. Whitaker, Sr. and started his professional acting career at the age of three by appearing in a television commercial for a local used car dealer. In 1965, he originated the character of the young Scotty Baldwin in the soap opera General Hospital. In 1966, he acted in a major feature film, The Russians Are Coming, the Russians Are Coming which also starred Brian Keith, the actor who would later play Whitaker's uncle in the television series Family Affair.

The show Family Affair aired from 1966–1971. It co-starred Whitaker playing the role of a 6-year-old orphaned boy named Jody Davis, living in a high-rise apartment in New York City with his sisters Buffy (Anissa Jones) and Cissy (Kathy Garver), his uncle Bill Davis (Brian Keith), and Bill's butler, Mr. French (Sebastian Cabot). Off the set, Whitaker was a close friend of Brian Keith, who became a second uncle to him. While a regular on the show, he also starred in the Hallmark Hall of Fame production The Littlest Angel and an episode of the long running western The Virginian in 1969.

After Family Affair, Whitaker went on to star in the 1973 Sid and Marty Krofft Saturday morning children's series Sigmund and the Sea Monsters alongside Billy Barty and Scott Kolden, as well as appearing in feature films, including Disney's Snowball Express, The Biscuit Eater, Napoleon and Samantha and The Magic Pony. His most prominent feature film role during this period was the lead in the 1973 musical version of Tom Sawyer.

Whitaker graduated from Sylmar High School, and then spent two years in Portugal doing missionary work for The Church of Jesus Christ of Latter-day Saints. Upon returning to the United States he attended Brigham Young University, graduating in 1986 with a degree in Communications. He worked as a computer consultant briefly at CBS as he mentioned in an interview with Tom Snyder on The Late Late Show, and later joined a Los Angeles talent agency, Whitaker Entertainment, owned by his sister. Whitaker was Dana Plato's former manager and a friend of the family. He is also a certified drug counselor.

In 1999, Whitaker was honored by the Young Artist Foundation with its Former Child Star "Lifetime Achievement" Award recognizing his outstanding achievements within the entertainment industry as a child star.

Whitaker was married to Symbria Wright of Reseda, California from 1984–1988. They briefly operated the "Someplace Else" delicatessen in Provo, Utah.

Whitaker was a guest at the 2009 Mid-Atlantic Nostalgia Convention where he signed autographs for fans.

He formerly starred in and co-produced the radio talk show, The Dr. Zod and Johnny Show.

He founded Paso Por Paso to help Spanish-speaking addicts and alcoholics find treatment. As a recovering drug addict himself, he's devoted himself to a career in addiction rehabilitation and treatment. He recently celebrated his 15th year of sobriety.