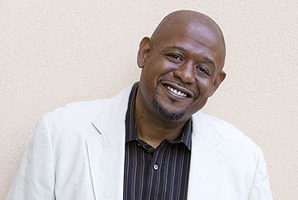 American award-winning actor who won an Oscar for best actor on February 26, 2007 for his portrayal of Idi Amin in "The Last King of Scotland." His riveting and terrifying performance won a Golden Globe as well as other awards. Whitaker is unusual looking--a large man with one eye that is noticeably droopy, lower than the other, and an overbite. He can look teddy-bearish, kind and gentle or forbidding and angry. With great talent, remarkable versatility, he performs convincingly and movingly in comedic, dramatic or tragic roles, whether minor, supporting or lead, ranging from a brutish dictator in "Last King of Scotland" to a complex musician in "Bird."

Whitaker is the oldest of three children whose father was an insurance agent dad and whose mother was a special education teacher. Putting his size to his advantage he played football in high school and won a sports scholarship to California State University at Pomona where he majored in drama and music.. Thinking he'd become a singer, he transferred to the University of Southern California to study voice. The stage beckoned and he began appearing in local productions. From there he landed bit parts in movies and in 1982 he took on a part that would launch his movie career. In "Fast Times at Ridgemont High" he played a tough guy in the teen comedy. Later, in "The Color of Money," he portrayed a pool shark. Although it was a minor role, people sat up and took notice and he earned a more substantial role in "Good Morning, Vietnam" starring Robin Williams. For each role, serious or comic, minor or starring, he prepares himself by studying everything he can about the themes, the character, the times and place and culture of the movie.He expanded his scope by taking on producing and directing jobs. His first directing gig was "Strapped" in 1993, a made-for-HBO film, which copped an International Critic's Award for est new director at the Toronto Film Festival. His director-hat movies include "Waiting to Exhale" in 1995, "Hope Floats" in 1998 and more. In 2001 he produced his first feature film.

Whitaker prefers to maintain his privacy and although he lives in Los Angeles, he stays out of the limelight. He married Keisha Nash on May 4, 1996.