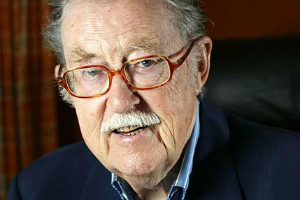 Alan Donald Whicker, CBE (born 2 August 1925) is a British journalist and broadcaster. His career has spanned over 50 years.

Whicker was born to British parents in Cairo, Egypt. When he was just three years old his father Charles became seriously ill and the family moved to Richmond in London (at that time in Surrey), where he and his mother remained after the death of his father. He attended Haberdashers' Aske's Boys School and, upon leaving school at 16 during the Second World War, he was commissioned as an officer in the Devonshire Regiment of the British Army. He then joined the British Army's Film and Photo Unit in Italy in 1943, filming at Anzio and meeting such influential figures as Field Marshal Bernard Montgomery. He was also responsible for taking into custody British traitor John Amery.

In 2004, Whicker appeared in a successful television series on this topic, titled Whicker's War. In this series he reveals that he was one of the first of the Allied forces to enter Milan and that he took into custody an SS general and troopers who were looking after the SS vault of money. Whicker also shot footage of the body of Benito Mussolini.

After the Second World War, Whicker became a journalist and broadcaster, acting as a newspaper correspondent during the Korean War (during which time his death was mistakenly reported), and after joining the BBC in 1957, was an international reporter for their Tonight programme. In 1959, this led to him presenting the television programme for which he is best known, the long-running documentary series Whicker's World which was filmed all over the globe. Whicker continued to present the series for more than 30 years (up until 1990) and he won a BAFTA Award in 1964 for his presentation in the Factual category; he also won the Richard Dimbleby Award at the 1977 BAFTA ceremony.

Whicker was instrumental in launching Yorkshire Television (which made Whicker's World for some years), producing television programmes for them from 1969 until 1992.

In the 2005 New Year Honours, Whicker was created a Commander of the Order of the British Empire for services to broadcasting.

While presenting Whicker's World, Whicker was well known for his subtle brand of satire, and social commentary. Whicker's World was parodied in a Monty Python's Flying Circus sketch featuring a tropical island, "Whicker's World", where all the inhabitants dress and act like Alan Whicker. Benny Hill, towards the end of his run with the BBC in 1968, impersonated Whicker in a parody called "Knicker's World".

Whicker has appeared in various commercials for Barclaycard, and is also the man behind the popular advertising slogan "Hello World", for travelocity.co.uk. He narrated the 2007 and 2008 BBC documentary series Comedy Map of Britain.

In 2009, aged in his mid-eighties, Whicker returned to some of the locations and people who were originally featured in Whicker's World for the BBC series Alan Whicker's Journey Of A Lifetime. In this, he met with various people whom he had interviewed decades earlier to see how their lives had progressed since the initial programme.

Whicker had a relationship with Olga Deterding from 1966 to 1969. He has been with his current partner, Valerie Kleeman (who is 20 years his junior), since 1969. He has neither married nor had children.