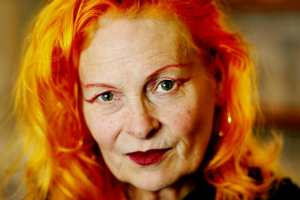 British fashion designer known as the Queen of Punk, winning the Designer of the year award in 1990 and 1991, and being made an OBE in 1992. Her work went on permanent display at the Victoria and Albert Museum in London and the Fashion Institute of Technology in New York City.

Famed for her unorthodox and startling approach, Westwood showed up at a show at Kensington Palace in a see-through dress, shoes and jewelry - period - at age 51. Often mocked in public, she has been derided by the media and her success has been on her own terms with no compromise. She attributes her unflappable confidence to her upbringing, stating that her parents totally loved each other and adored their children. They were working class people but upwardly mobile. Vivienne wanted to be a painter and studied at art school, but left for a factory job. She continued school to get her teaching credentials and taught for a year before marrying Derek Westwood. They had son Ben in 1963 but the marriage went by the wayside. Vivienne lived with her mom while teaching and on the side, making jewelry which she sold in Portobello market.

She became involved with Malcolm McLaren and their son Joseph was born in 1969. Joseph is now her business manager. She continued teaching until she and Malcolm opened their first shop, "Let it Rock." It gained a small cult following and with the advent of punk, Vivienne came into her own. Malcolm became the manager and creator of the Sex Pistols, and Westwood began to turn out the punk creations that were the mark of the '70s and '80s.

Dame Vivienne Westwood is currently (2012) married to her former fashion student, Austrian-born Andreas Kronthaler. For 30 years Westwood lived in the council flat in Clapham until, in 2000, Kronthaler convinced Westwood to move into a Queen Anne style house built in 1703, which once belonged to the mother of Captain Cook. Westwood does not watch television or read newspapers or magazines. However she is a keen gardener.