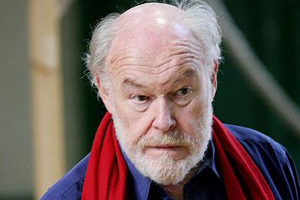 West was born in Bradford, West Riding of Yorkshire, the son of Olive (née Carleton-Crowe) and actor Harry Lockwood West, known as Lockwood West. He was educated at The John Lyon School, a boys' independent school in Harrow on the Hill in London, at Bristol Grammar School in Bristol, where he was a classmate of Julian Glover, and at Regent Street Polytechnic.

West worked as an office furniture salesman and as a recording engineer, before becoming an Assistant Stage Manager at the Wimbledon Theatre in 1956.

West played repertory seasons in Newquay, Hull, Northampton, Worthing and Salisbury before making his London debut at the Piccadilly Theatre in 1959 in the farce Caught Napping. He was a member of the Royal Shakespeare Company for three seasons: the 1962 Arts Theatre Experimental season (Nil Carborundum and Afore Night Come), the 1964 'Dirty Plays' season (Victor, the premiere production of Marat/Sade and the revival of Afore Night Come) and the 1965 season at Stratford and later at the Aldwych Theatre appearing in The Comedy of Errors, Timon of Athens, The Jew of Malta, Love's Labour's Lost and Peter Hall's production of The Government Inspector, in a company which included Paul Scofield, Eric Porter, Janet Suzman, Paul Rogers, Ian Richardson, Glenda Jackson and Peter McEnery.

Timothy West has played Macbeth twice, Uncle Vanya twice, Solness in The Master Builder twice, and King Lear three times: in 1971 (aged 36) for Prospect Theatre Company at the Edinburgh Festival and on a worldwide tour; in 1991 in Dublin for Second Age and in 2003 for English Touring Theatre, on tour in the UK and at the Old Vic.

Having spent years as a familiar face who never quite became a household name, West's big break came with the major television series, Edward the Seventh (1975), in which he played the title role from the age of twenty-three until the King's death;[6] his real-life sons, Samuel and Joseph, played the sons of King Edward VII as children. Other screen roles have included Nicholas and Alexandra (1971), The Day of the Jackal (1973), The Thirty Nine Steps (1978), Masada (1981), Cry Freedom (1987) and Luc Besson's The Messenger: The Story of Joan of Arc (1999). In Richard Eyre's Iris (2001) he plays Maurice and his son Samuel West plays Maurice as a young man.

West appeared in the series Miss Marple in 1985 (in A Pocket Full of Rye as the notorious Rex Fortescue). He made a memorable appearance as Professor Furie in A Very Peculiar Practice in 1986.

In 1997, he played Gloucester in the BBC television production of King Lear, with Ian Holm as Lear.

From 2001-2003, he played the grumpy and frequently volatile Andrew in the BBC drama series Bedtime, with Sheila Hancock playing his long-suffering wife, Alice. At Christmas 2007, he joined the cast of sitcom Not Going Out as Geoffrey Adams, the father of two central characters. He reprised this role in two episodes of series two; Geoffrey Whitehead played the role in later seasons.

In 2010, he appeared alongside John Simm and Jim Broadbent in BBC series Exile, written by BAFTA-winning Danny Brocklehurst.

He was Artistic Director of the Forum Theatre, Billingham in 1973, where he directed We Bombed in New Haven by Joseph Heller, The Oz Obscenity Trial by David Livingstone and The National Health by Peter Nicholls. He was co-artistic director of the Old Vic Theatre from 1980–81, where he directed Trelawney of the Wells and The Merchant of Venice. He was Director-in-Residence at the University of Western Australia in 1982.

In 2004, he toured Australia with the Carl Rosa Opera Company as Director of the production of HMS Pinafore, also singing the role of Sir Joseph Porter. He was replaced in the singing role by Dennis Olsen for the Perth and Brisbane performances.

West is married to the actress Prunella Scales. One of their sons, Samuel West, is also an actor.

West and Scales are both prominent supporters of the Labour Party. They are also patrons of the Lace Market Theatre in Nottingham, and of Conway Hall Sunday Concerts programme, the longest running series of chamber music concerts in Europe.

West is an Ambassador of SOS Children's Villages, an international orphan charity providing homes and mothers for orphaned and abandoned children. He currently supports the charity's annual World Orphan Week campaign which takes place each February.

West is patron of The National Piers Society, a charity dedicated to preserving and promoting seaside piers. He also supports Cancer Research UK.