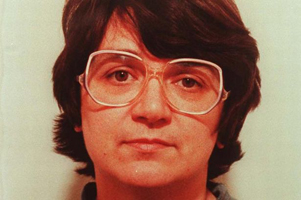 Rosemary Pauline "Rose" West (née Letts; born 29 November 1953) is a British serial killer, now an inmate at HMP Low Newton, Brasside, Durham, after being convicted of 10 murders in 1995. Her husband Fred, who committed suicide in prison while awaiting trial, is believed to have collaborated with her in the torture and murder of at least 10 young women, many at the couple's home in Gloucester, Gloucestershire, England.

Fred West is known to have carried out 12 murders. Rosemary West had no involvement in the first two.

Rosemary Letts was born in Barnstaple, Devon, to William Andrew and Daisy Gwendoline Letts after a difficult pregnancy. Her mother suffered from depression and was given ECT while pregnant; some have argued that this may have caused prenatal injury to her daughter. Rosemary grew up into a moody teenager and performed poorly at school.

Rosemary's parents split up when she was a teenager. She lived with her mother before moving in with her father at the age of 16 in Bishop's Cleeve, near Cheltenham; her father, a paranoid schizophrenic, was prone to violence and repeatedly sexually abused her. At around this time, she began dating West who was living at Lake House Hotel Caravan Park, Stoke Road, Bishops Cleeve. Her father disapproved of the relationship, threatening to call social services and threatening West directly. Rosemary was caring for West's daughter Anne-Marie (by his previous marriage to Rena Costello) and his stepdaughter, Charmaine (daughter of Rena Costello and another man). West and Rosemary moved in together at the Lake House Hotel Caravan Park; Charmaine briefly attended Bishops Cleeve County Primary School on Tobyfield Road. However, by 1970, Rosemary found herself pregnant by West and they moved to Midland Road, Gloucester.

Rosemary West and her husband were convicted of sexual assault in January 1973. They were fined for indecent assault of Caroline Roberts (née Owen), who escaped the couple's home after being attacked and reported them to the police. The Wests' typical pattern was to pick up girls from bus stops in and around Gloucester and imprison them in their home for several days before killing them.

She also periodically worked as a prostitute, often while her husband watched. One of the most frequent visitors to 25 Cromwell Street (51°51′42″N 2°14′36″W), now demolished, was her abusive father. She was often pregnant and was the mother of eight children. Five of these were fathered by Fred West, while three were fathered by clients she met through prostitution.

It is reported that, even after the birth of her fourth child, Rosemary's father would still visit her for sex, and would then rape Fred's daughter Anne-Marie.

The crimes for which Rosemary West was convicted occurred mainly between April 1973 and August 1979. She murdered Charmaine West, the daughter of Fred's previous wife Rena, in June 1971, and buried her in their previous home of 25 Midland Road, Gloucester while Fred West was serving a prison sentence for petty theft. One of the bodies found at 25 Cromwell Street was that of their daughter, Heather, who was murdered by Fred in June 1987 at the age of 16, after being abused by Rosemary while Fred raped her. The Wests told friends and concerned parties that Heather had gone away to work at a holiday village. This was the last known murder that the pair committed.

In August 1992 Fred West was arrested after being accused of raping his 13-year-old daughter three times, and Rosemary West was arrested for child cruelty. This case against them collapsed in June 1993 when their daughter refused to testify in court. All of the Wests' children were removed from their custody to foster homes. This case brought to light the disappearance of Heather West, who had not been seen since 1987, and triggered the major investigation that followed.

Although she did not confess, the circumstantial evidence against Rosemary West was overwhelming. She went on trial in October 1995, nine months after her husband's suicide. He had hanged himself in Winson Green Prison with a knotted bed-sheet on 1 January of that year, despite being on suicide watch.

The jury was unanimous. On November 22, 1995, West was found guilty of 10 murders. The judge, Mr Justice Mantell, sentenced her to life imprisonment, saying, "If attention is paid to what I think, you will never be released."

The Lord Chief Justice later decided that she should spend at least 25 years in prison, but in July 1997 Home Secretary Jack Straw subjected West to a whole life tariff. This was only the second instance, in modern times, of a British woman being condemned to die in prison. The other was serial killer Myra Hindley, who has since died. At the start of her sentence, West was held at the same prison as Hindley.

In 2001 West announced her intention not to appeal, while maintaining her innocence.

The whole life tariff was declared illegal by the European Court of Human Rights on 13 July 2013, meaning that West will have to receive a new minimum term from the High Court.

In 2003 West and Dave Glover, bassist with glam rock group Slade, announced their engagement. The engagement was called off shortly afterwards and Glover was fired from Slade.

The house at Cromwell Street (along with the adjoining property) was demolished in 1996. The site is now occupied by a public walkway.