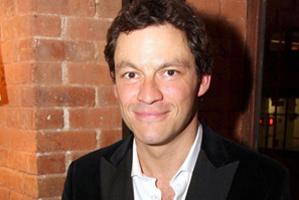 Dominic Gerard Fe West (born 15 October 1969) is an English actor best known for his role as Detective Jimmy McNulty in the HBO drama series The Wire.

West made his debut in 1991 in a short called 3 Joes. His other screen appearances include True Blue, Chicago and Mona Lisa Smile. His most notable television role has been Baltimore police detective Jimmy McNulty on the HBO television police drama The Wire. West was praised for the accuracy of his character's American accent.

During his stint on The Wire, West directed the season 5 episode, "Took".

In film, he portrayed the heavy metal guitarist Kirk Cuddy in the 2001 film Rock Star. In 2006 West made a guest appearance as an actor in a sketch in The Catherine Tate Show, alongside "Frankie Howerd impressionist". In 2007, he played the Spartan politician Theron in 300 and a detective in Hannibal Rising and then in 2010 a Roman General in Centurion. West also starred in the 1999 film version of William Shakespeare's A Midsummer Night's Dream as Lysander.

West appeared in the role of Oliver Cromwell in the Channel 4 series The Devil's Whore. West played the villain, Jigsaw, in the 2008 film Punisher: War Zone. He also features in "Dr. West", the opening track on Eminem's 2009 album Relapse, as a doctor discharging Eminem from a rehab facility. West played the part over the phone in January 2009 while Eminem was recording it in a Miami studio.

In December 2009, he starred as Hank in a radio adaptation of Eugene O'Neill's expressionist play The Hairy Ape for BBC Radio 3, was a guest presenter on the BBC show Have I Got News for You, and ended the year alongside Joan Rivers and Sarah Jessica Parker with an appearance on Graham Norton's New Year's Eve Show. West portrayed General Virilus in Neil Marshall's adventure thriller Centurion and stars in the UK Ghost film The Awakening.

In 2011, West appeared as a news presenter on the BBC-TV period drama series The Hour. He also played serial killer Fred West in the ITV series Appropriate Adult, giving a performance that the serial killer's daughter described as capturing the "evil essence of  - his character, his mannerisms, even his gait."

In 2012, West was offered the part of Mance Rayder in the HBO fantasy series Game of Thrones, but turned it down due to the amount of time he would have to spend away from his family.

As a theatre actor, West has appeared as Konstantin in the Peter Hall-directed The Seagull (1996) at the Old Vic. In 2005, he returned to the stage to play Orlando in David Lan's As You Like It at the Wyndham's Theatre in London. He played Edward in Harley Granville Barker's The Voysey Inheritance directed by Peter Gill at the Royal National Theatre in 2006. In late 2006 and early 2007, he played the lead role of Jan in Tom Stoppard's Rock 'n' Roll in London's West End.

Continuing his theatre work, he starred at London's Donmar Warehouse as the protagonist in Pedro Calderón de la Barca’s existential drama Life is a Dream, for which he received glowing reviews.

In February 2011, it was announced that he would take on the title role in Simon Gray's classic comedy, Butley, playing at the Duchess Theatre in London from 1 June 2011 and in the September he returned to his native Sheffield to play Iago to his former Wire co-star Clarke Peters's Othello at the Crucible Theatre.

From mid December 2012 to January 2013 West starred as Professor Henry Higgins in My Fair Lady at the Crucible Theatre in Sheffield.

In 2009, West starred in a series of online films known as "The Carte Noire Readers". Made to promote French coffee brand Carte Noire, they consist of actors reading love scenes from a selection of sources. West reads extracts from Pride and Prejudice by Jane Austen; Lady Chatterley's Lover by D.H. Lawrence; High Fidelity by Nick Hornby; The Age of Innocence by Edith Wharton; Life Class by Pat Barker; The Moment You Were Gone by Nicci Gerrard; and Something Childish But Very Natural by Katherine Mansfield.

West was born into an Irish Catholic family in Sheffield, in the West Riding of Yorkshire, the son of George West, who owned a plastics factory, and Moya, a housewife. West attended Eton College and Trinity College, Dublin. Dominic West graduated from the Guildhall School of Music and Drama, London, in 1995.

In 1998, West and Polly Astor (the daughter of Michael Astor) had a daughter named Martha, who appeared in the film Creation in 2009 alongside Paul Bettany and Jennifer Connelly.

West and Catherine FitzGerald married in Glin, County Limerick, Ireland, on 26 June 2010. They have four children together: Dora, Senan, Francis. Catherine FitzGerald is an Anglo-Irish aristocrat, being the daughter of Desmond FitzGerald, the 29th (and last) Knight of Glin, and was formerly married to Edward Lambton, 7th Earl of Durham.

In November 2010, West was awarded an honorary degree for services to the Arts by Sheffield Hallam University, and in November 2011, West was also awarded the Honorary Patronage of the Philosophical Society of Trinity College, Dublin, where he graduated from with a degree in English in previous years..