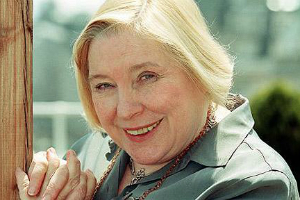 British-New Zealand writer most widely known in the UK and abroad as an irreverent novelist largely concerned with women's issues as well as active in a wide variety of projects for television, radio, and the stage. Weldon is one of the few authors whose every new novel or story is endlessly discussed and argued over.

Raised in a literary family, Weldon grew up reading nonstop. Her first novel was published in 1967 as an extension of her advertising career in which she continued for an additional three years while producing teleplays.

During the early ‘70s, Weldon’s name and public voice gained stature, seen as satirical and often barbed. She not only won a prestigious Booker Prize nomination for "Praxis,"1978, but chaired the prize's 1983 panel. She has never divorced her "serious" literary work from her own enjoyment of what she calls "that whole women's magazine area, the communality of women's interests, and the sharing of the latest eye-shadow." It is therefore not surprising to read her polemical prison docudrama "Life for Christine," 1980, as well as her script for Joan Collins' "Sin" miniseries, 1985, in contrast to her critical eye focused on pastoral life in "Heart of the Country," 1987. Weldon has been notably represented on British TV and abroad through two popular multi-part adaptations from her novels: "The Life and Loves of a She-Devil," 1984, televised 1986, which sharply satirized conventions of both heterosexual romance and the romance novel, and "The Cloning of Joanna May," 1989, televised 1992, a slightly more genteel version of She-Devil's antics, this time as practiced by a devilish husband.

Born in Worcester, Worcestershire, England, Weldon grew up in New Zealand where she attended the U. of St. Andrew's, earning an M.A. in economics and psychology, 1954. She married Ron Weldon in 1962 and was widowed two years later. She had a brief second marriage to give her illegitimate first son a name and in 1965 she married Nick Fox; they had three more sons. She lost her one-year-older sister to a brain tumor. Her writing career began with the Foreign Office and Daily Mirror, London in the late ‘50s and after a decade of odd jobs and hard times she began writing fiction. She worked in advertising and was the author of TV and radio plays, dramatizations and series, novels and stage plays, all of which brought in awards and prestigious acknowledgements. Her TV series included "Pride and Prejudice," 1980. She has recently published "Godless in Eden" and lives in London.