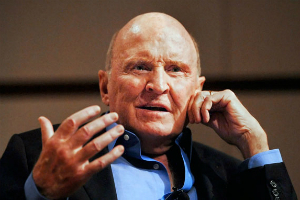 American business executive, perhaps the most touted CEO in America over the past 20 years. The head of General Electric from 1981, Welch retired on 9/07/2001 with a record of returning more value to shareholders than even Bill Gates or Sam Walton, an increase of more than 3,000% during his tenure. His autobiography, "Jack: Straight From the Gut," became an instant best-seller upon its publication, 9/11/2001.

Welch recreated GE, taking an inefficient company into an upwardly mobile behemoth that sells airplane engines, provides mortgages and runs a TV network. A ferocious deal-maker, he was named Manager of the Century by Fortune magazine. For 20 years, Jack worked his way through GE, including the plastics division and Credit corporation, rising to the top job in 1981, succeeding Reginald Jones. When he retired, he left his hand-picked successor, Jeff Immelt. He spent five weeks on a tour to promote the book that copped a $7 million dollar advance, and was then available as a Consultant. He joined a New York private equity firm as a special partner.

A slight man who speaks with a heavy Boston accent, Jack comes across like an ordinary Joe, putting people at ease. He can be blunt, crude, coarse, profane and funny, what may be called "paht of his chahm." He’s a man’s man with three passions; G.E., golf and the Boston Red Sox. He went through a divorce and two heart attacks along the way and admits that he could have been a better dad to his four kids. He was the only child of older parents. His dad was a conductor on the railroad and he was closest to his mom, who encouraged his self-confidence when he stuttered. He was devastated by her death in 1965. He studied chemical engineering at the University of Illinois and started with GE in 1960 at a salary of $10,500 a year.

When his first marriage broke up in 1987, he wrote that it was "difficult and painful." As to parenting, he could only note that he was "the ultimate workaholic." His second wife, Jane, is a spirited Alabama-born lawyer 17 years younger than he. They both love golf and are both club champions. They live in Connecticut but vacation in Nantucket. Welch's second marriage came to an end with the public disclosure of his affair with Suzy Wetlaufer, 42, a divorce who edits the Harvard Business Review. Wetlaufer was openly delighted in telling colleagues that their relationship began in November 2001, after she completed a series of interviews to compliment the publication of his book. It was ongoing when it reached the pages of Time magazine in March 2002.The former CEO of General Electric married Suzy Wetlaufer on April 24, 2004 at the Park Street Church in Boston, MA. At age 68, Welch has been married twice previously and Wetlaufer, 44, once before. After the one-hour ceremony Welch exclaimed, "I’ve never been a better man."

His second book, “Winning,” was released in early April 2005. The book provides advice on climbing the corporate ladder, managing competition, and leadership.