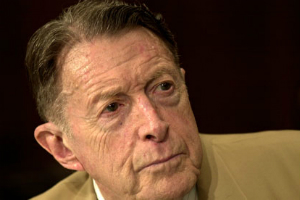 American political aide who was key to President Nixon's program to trim federal spending. Having served as the Secretary of Health, Education and Welfare he also served as the Director of Management and Budget from 1970. In addition, he served on a state legislature in 1952.

Prior to entering politics, for which he had an interest from high school, he was a member of the U.S. Army in WW II. Serving under General MacArthur, he also was a member of his Intelligence Staff. As he is known for having an air of insouciant irreverence and a wry, self-depreciating wit, he also is known for his nickname, "the warm, sympathetic and understanding axe man."

In November 1987 he resigned from his positions to spend time with his wife of 45 years, with whom he had two children and who now had cancer.

In January 1989, Weinberger re-entered the work force in the position as publisher of "Forbes" business magazine. He also began writing, at that time, a fortnightly column on politics and business.

In 1992, he was implicated in the Iran-Contra affair, in which members of the Reagan adminisration covertly sold arms to Iran and diverted the procees to the Nicaraguan rebels, the Contras. Indicted on felony charges of perjury and obstruction of justice, Weinberger vigorously denied the charges. His trial was scheduled to take place in 1993 but on Christmas Eve, 1992, President George Herbert Walker Bush issued him a pardon.

The Chairman of Forbes, Inc., former cabinet member and presidential advisor to three Republican Presidents died of pneumonia on March 28, 2006 in Bangor, Maine. He had been undergoing dialysis for two years prior to his death.