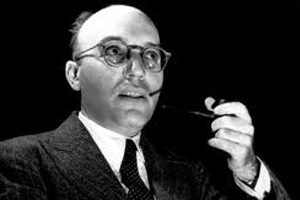 German-American composer, an important figure in German musical life during the period of the Weimar Republic. He left Germany as a refugee from the Nazis and became an American citizen. He created a revolutionary type of opera with sharp social satire with Bertolt Brecht on "The Threepenny Opera" and "The Rise and Fall of the City of Mahagonny." Some fifty years after his death, his Broadway works are attracting revived attention.

Weill studied at the Staatliche Hochscule für Musik. At Dessau and Lüdenscheid he gained experience as an opera coach and conductor from 1919-1920. In Berlin he studied under Busoni from 1921-1924. His early music was expressionistic, experimental and abstract. "Der Protagonist," 1926, and "Royal Palace," 1927, his first two operas, established him as one of Germany’s most promising young opera composers.

Weill’s first collaboration with Bertolt Brecht, "Mahagonny" satirized life in an imaginary America that was also Germany and was a big success at the Baden-Baden, Germany film festival in 1927. "The Threepenny Opera" was a transposition of the 18th century characters from "Beggar’s Opera" into characters typical of Berlin’s underworld in the 1920s. "Mahagonny" was expanded into a full-length opera, "The Rise and Fall of the City of Mahagonny" and was first presented in Leipzig in 1930. Widely considered Weill’s masterpiece, the opera showcased a synthesis of American popular-ragtime-jazz music.

After the production of "Die Bürgschaft" in 1932, Weill’s political and musical ideas and his Jewish birth made him unacceptable to the Nazis, and he left Berlin for Paris and then for London. His music was banned in Germany until after World War II. He resumed his career in New York City, writing music for American productions including "Lady in the Dark" in 1941 with libretto and lyrics by Moss Hart and Ira Gershwin. Weill’s folk opera "Down in the Valley," in 1948, was much performed.

Weill married actress Lotte Lenya in 1926. She sang for the first time in "Mahagonny" in 1927. They divorced in 1933, but remarried in 1937 in New York City. He died on 04/03/1950 in New York City. Two of his songs, "Mack the Knife" and "September Song" have remained popular. His violin concerto and two symphonies were revived after his death.