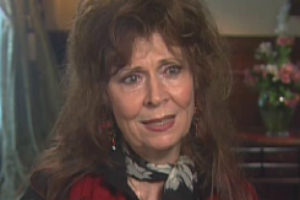 Born Elizabeth Ann Wedgeworth to Cortus and Elizabeth (née Thompson) Wedgeworth, she graduated from Highland Park High School in University Park, Texas, where she was a childhood friend and high school classmate of Jayne Mansfield. She dropped her first name after graduating from the University of Texas in 1957, and moved to New York City. After auditioning several times, she was admitted to The Actors Studio.

Wedgeworth joined the cast of Three's Company in 1979. After the departure of Mr. and Mrs. Roper, Wedgeworth somewhat replaced Mrs. Roper's love-starved personality as Lana Shields, an older neighbor who has had three previous husbands. Lana first appears in "Love Thy Neighbor" (season 4, episode 2), when Jack Tripper is talked into being Lana's date. "Mrs. Shields", as Jack originally addresses her, becomes head-over-heels in love with him, and by the end of the episode has moved in next door to Jack, Janet Wood, and Chrissy Snow. However, after a few episodes Lana's appearances became smaller and less frequent. Lana disappeared from the show before mid-season, with no explanation given.

It is in the episode "A Black Letter Day" (season 4, episode 13) that we see the last of Lana, as per the episode description, "Lana thinks Jack is having an affair with Janet or Chrissy after she reads an advice column and jumps to conclusions". In one of the episode's last scenes, Lana angrily dumps a drink on Jack's head, and storms out of The Regal Beagle. After this, we never see or hear of Lana again. Wedgeworth revealed to author Chris Mann that she wasn't "fired", but rather asked to be let go. After shooting a couple of Three's Company episodes, she claimed some of the cast members were complaining about the size of her role, and subsequently, her part dwindled down to "practically nothing". She asked the producers to either re-write the part of Lana back to the way it was intended and promised to be or to release her so she could pursue other opportunities. The producers released her from the show.

In 1982, she worked with Linda Bloodworth-Thomason in her first series, Filthy Rich, playing ditsy, good-natured Bootsie Westchester. In 1989, she played Audrey Conner, the emotionally fragile mother of Dan Conner (played by John Goodman) on Roseanne.

Throughout the 1980s, Wedgworth took many supporting film roles, often playing mothers, such as in No Small Affair, as Jon Cryer's mother, and in 1987's Made in Heaven as a mother unknowingly reunited with her dead son, and Patsy Cline's mother in "Sweet Dreams" starring Jessica Lange in 1985. In 1989 she portrayed Aunt Fern in Steel Magnolias. She appeared in the 1991 film Hard Promises. From 1990–94 she played Merleen Eldridge on the sitcom Evening Shade. Most recently, she appeared in The Hawk Is Dying, with Paul Giamatti, which opened at the Sundance Film Festival.

She appeared off-Broadway at New York's Promenade Theatre from December 5, 1985 until June 1, 1986 in Sam Shepard's A Lie of the Mind, co-starring Harvey Keitel and Geraldine Page; coincidentally Page, a decade Wedgeworth's senior, had married actor Rip Torn after his divorce from Wedgeworth. At the time Page and Torn were married, but were estranged at the time of Page's death in 1987.