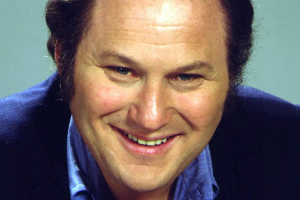 Albert Samuel Waxman, CM OOnt (March 2, 1935 – January 18, 2001) was a Canadian actor and director of over 1000 productions on radio, television, film, and stage. He is best known for his starring roles in the television series King of Kensington (CBC) and Cagney & Lacey (CBS).

Waxman was born in Toronto to Jewish immigrants from Poland.

His parents operated and owned Melinda Lunch, a small restaurant. His father, Aaron Waxman, died when Al was nine.

Waxman's career began at the age of twelve on CBC radio but it was not until 1975, when he began playing the role of Larry King on CBC's King of Kensington (1975–1980), that he became a Canadian icon.

During the 1980s Waxman starred as the gruff but endearing Lt. Bert Samuels in the highly successful CBS television drama Cagney & Lacey (1982–1988).

In 1986 Al and Anita Waxman were associate producers of the first London revival of Irving Berlin's musical Annie Get Your Gun, starring Suzi Quatro as Annie Oakley and Eric Flynn as Frank Butler.

During the 1990s Waxman appeared in a variety of films and television shows but began spending more time acting and directing in the theatre. In 1991 Al hosted Missing Treasures, a TV show which profiled missing children in Canada. He was also a founding member of the Academy of Canadian Cinema and Television.

In 1997 he was awarded the best actor Gemini Award for his performance in the television film Net Worth.

Waxman also appeared at the Stratford Festival, beginning with his critically acclaimed performance as Willy Loman in Death of a Salesman in 1997. He also directed a memorable Anne Frank at the Stratford Festival in 2000. He was to return to Stratford for his highly anticipated portrayal of Shylock in The Merchant of Venice in 2001. In the wake of Waxman's death one month before rehearsals were to begin Paul Soles accepted the part of Shylock and the play was performed in honour of Waxman.

His last television role was as celestial Judge Othneil in Twice in a Lifetime (1999–2001). The last episode on which he worked right up until the afternoon before his elective heart bypass surgery was about a man, popular in his community, who needed routine bypass surgery but died during the operation. Although some sections of the episode were rewritten, at the end of this final episode Waxman's character is asked rhetorically 'why do the good die young' to which he has no answer. He's then told 'you were quite a warrior'. His response - not merely the end of the episode, but one of Waxman's last lines ever recorded, and spoken with a smile of resignation from the heavens - was: 'I had my day'.

Throughout his career he responded to the need for his services in community work and was involved with charitable causes from coast to coast. He was spokesperson for organizations such as United Appeal, United Jewish Appeal, Israel Bonds, Variety Club, the Muscular Dystrophy Telethons, and Big Brothers (for which he also became an honorary member). From June 1979 to June 1981 he was the National Campaign Chairman for the Canadian Cancer Society, and from 1988-1989 he was an official spokesperson for the Heart & Stroke Foundation of Ontario. Together with his wife, Sara Waxman, he also created the Sara and Al Waxman Neo-Natal Unit at the Shaare Zedek Medical Centre in Jerusalem.

Al Waxman was accorded many tributes for his volunteer and philanthropic work. In 1978 he was honoured with the Queen's Silver Jubilee Medal. In 1989 he was the recipient of the B'nai Brith of Canada Humanitarian Award. In 1996 Waxman was inducted into the Order of Ontario and in 1997 into the Order of Canada. In 1998 he was given the Earle Grey Award for lifetime achievement in Canadian television. A statue erected for his popularity as a Canadian star actor, director, and humanitarian stands in Kensington Market. The inscription in front of it reads 'There's lots to do down the road, there's always more. Trust your gut instincts. In small matters trust your mind, but in the important decisions of life - trust your heart.'

He died in Toronto during heart surgery on January 18, 2001, at the age of 65. The Toronto neighbourhood that his starring role in King of Kensington made famous, Kensington Market, erected a memorial to Waxman following his death.

Musician Jaymz Bee of the Bee People, (prior to his work with The Look People, The Royal Jelly Orchestra and various projects) was a founder of the Al Waxman Fan Club. The Fan Club began in 1984 following the heyday of the King of Kensington television show. Bee, his associates Clay Tyson (son of Ian and Sylvia), Bazl Salazar, Bruce J. Scott and artist Max MacDonald would host parties and write songs in honour of Waxman. They even created a dance called "The Waxman Wiggle". Some other Bee People songtitles included: "Have Al Instead", "Al or Nothing", "UniversAl" and "Puff, The Waxman Poodle". While the Fan Club initially appeared to be a publicity stunt, this led to a long and successful association between Jaymz Bee and Al Waxman. Waxman attended some of the Fan Club events as organised by Bee, most of which raised money for charities such as The Canadian Cancer Foundation and Big Brother. Bee attended Waxman's funeral, and joined with his Fan Club to hold a wake in Toronto on 25 January 2001. They had a New Orleans-style funeral march with a jazz band and paraded from The Cameron House to Kensington Market where they recorded his hit TV theme song with Vezi Tayyeb at Kensington Sound. The AWFC boasted over 1,000 card carrying members and while the bulk of members were from Toronto, some were as far away as Japan and Africa. President Bee received a terse reply from Buckingham Palace however, notifying him that The Queen does not "join a fan club". Al Waxman realized over the years that this organization, while appearing tongue in cheek, was a group of bonafide fans who enjoyed celebrating "the King of Canada". Members of the now dormant AWFC can still be seen wandering through Kensington Market to shake the hand of the Al Waxman statue that resides there.