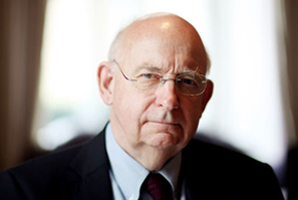 Waterstones now employs 4,500 staff, is the largest specialist bookseller in Europe, with stores in the UK, Holland, Belgium and Ireland, and is the third largest bookseller in the world.

Tim Waterstone was educated at Tonbridge School and St Catharine's College, Cambridge, where he read English. He then went to India where he worked for a broking firm in Calcutta. Upon his return to England he worked as a marketing manager for Allied Breweries, 1964–73 and then W.H. Smith, 1973–81. He founded the bookselling chain Waterstone's in 1982, and became the founder chairman of HMV Media Group in 1998, which merged the businesses of Waterstone's and HMV. He left the group in 2001.

He is the co-founder of Bookaid, has sat on the Booker Prize Management Committee, and acted as the Chairman Of Judges for the Prince’s Youth Business Trust Awards. He is a member of the visiting committee of Cambridge University Library (2007 – present). He chaired Shelter's 25th Anniversary Appeal, and in 1999 chaired the DTI Working Group on Smaller Quoted Companies and Private Investors. He is the chancellor of Edinburgh Napier University (2007 – present). He is the Bishop's nominee to the Southwark Cathedral Council (2012 -). He was a Labour Party donor in the 1997 and 2001 general election campaigns, and was one of the signatories of the letter from 67 business leaders to the Financial Times in 1997 calling for a Labour Party election victory.

He has published four novels: Lilley & Chase (Hodder 1994), An Imperfect Marriage (Hodder 1995), A Passage of Lives (Hodder 1996) and In For A Penny In For A Pound (Atlantic 2010). He has also published a semi-autobiographical business book, Swimming Against The Stream (Macmillan 2006) and many articles in the arts and business media. He is married to the TV and film producer and novelist Rosie Alison. He has eight children.